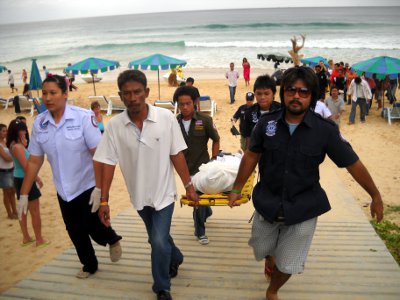 PHUKET: Friends and relatives watched in horror as Thai construction worker Kittisak Thongtirat was swamped by a big wave, then disappeared in rough surf at Karon Beach on Monday.

He was one of two people who drowned at the popular beach that afternoon.

“His friends and relatives warned him and tried to stop him entering the rough surf while wearing jeans, but he wouldn’t listen,” said Lt Nitikorn.

“People nearby and friends rushed to help him, but nobody could do anything,” he added.

One man trying to help was caught in a rip current and was dragged out to sea. Lifeguards were forced to launch a jet-ski to safely recover him, Lt Nitikorn said.

Lifeguards, local businesspeople and even the Navy joined the search, but it was not until Tuesday afternoon that Mr Kittisak’s body was found about 100 meters offshore, two kilometers from where he was last seen.

Also on Monday, 40-year-old Russian tourist Dmitriy Kuznetsov succumbed to the wild waves at Karon while his wife and child were sitting on the beach.

Mr Kuznetsov arrived on vacation with his family on October 27, staying at the Karon Sea Sand Hotel.

Witnesses told the Gazette that Mr Kuznetsov entered the surf in a no-swimming zone in front of the hotel marked by red flags.

Lifeguards said they warned him not to enter the surf.

When he reached chest-high water, he was lost to the waves almost immediately. One witness, a taxi driver, said, “It seemed like he started calling for help seconds before he disappeared under the water.”

Beach guards rushed and pulled him from the surf, but the damage was done.

Mr Kuznetsov was pronounced dead on arrival at Patong Hospital.

His family had to fly home on Tuesday with their tour group.