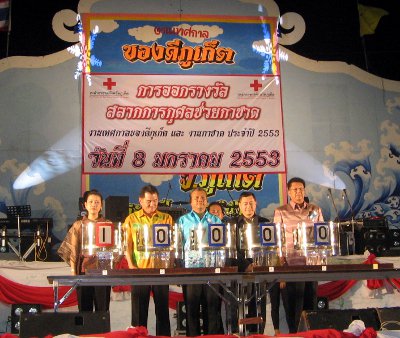 PHUKET: A new home will be the grand prize in the raffle held during the upcoming Phuket Red Cross Fair.

Plans are already well in place for the joint Red Cross Fair and New Year celebrations in Phuket Town, which will take place over 11 fun days at Saphan Hin public park.

The “Good Things of Phuket and Red Cross Fair Festival” will take place from December 30 to January 9.

On Tuesday, Phuket Governor Tri Augkaradacha presided over a meeting at Provincial Hall to appoint a supervisory committee and inform all parties of the festival dates and planning requirements.

Activities will kick off at precisely 9:49am on December 30, when a traditional worship ceremony at the Saphan Hin shrine to Admiral Krom Luang Chumphon Khet Udomsak, Father of the Royal Thai Navy, will take place.

The festival will officially open at the Saphan Hin Central Stage area at 5:30pm the same day.

Starting at 11pm on New Year’s Eve, there will be a ceremony to ring out 2010. The public will be asked to join Gov Tri in singing the Thai song traditionally sung at year’s end. This will of course be followed by a countdown and much revelry at the arrival of 2011.

At 7am the following day, 2011 will be welcomed in at another ceremony at Queen Sirikit Park on Thalang Road in Phuket Town.

At 10pm on January 8, the Red Cross Fair raffle – always a highlight of the event – will take place on the Saphan Hin Central Stage.

It is the second consecutive year a house will be the grand prize. Phuket is the only province that has ever given away a dwelling as part of a Red Cross Fair raffle.

The Red Cross has chapters in all 76 provinces, most are chaired by the wife of the provincial governor.