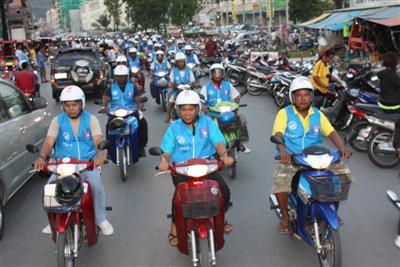 The initiative is part of a road safety and crime prevention campaign created by Kathu Police Superintendent Grissak Songmoonnark.

At 1 pm on Saturday, about 400 members of the Patong Motorbike Taxis Cooperative assembled on the grounds of Suwan Kiriwong Temple in Patong for the activities, which ended with a group ride along the streets of Patong.

Patong Motorbike Taxi Co-op committee member Somchai Niewnan said that the helmets were given to 100 specially screened members of the co-operative committed to offering safe services at fair prices.

“If the project goes well and there are fewer complaints from tourists, more helmets will be distributed within a year,” he said.

Mr Somchai encouraged any passenger who observes a helmeted driver engaging in careless driving to call him on his mobile phone at 080-520 3210.

Of the 928 members of the Patong Motorbike Taxis Cooperative, 537 are licensed, he said.

There is also another co-operative in Patong, operating a total of 300 taxis, some of which are motorcycles. The group has their own standards and a committee, Mr Somchai said.

As motorbike taxis are ubiquitous on the streets, they can help act as the eyes and ears of the Kathu Police, he said.

With project members all wearing the same helmet, those who break the rules will be easy to spot, he said.