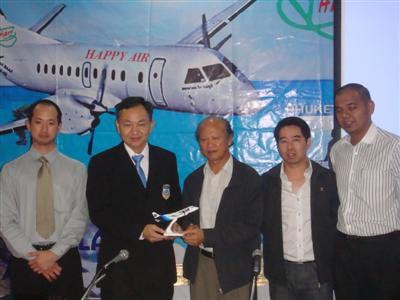 The service, which takes 40 minutes, is aboard a Swedish-built SAAB 340A aircraft.

The 34-seat, twin-engine turboprop plane will be manned by two cabin crew per flight.

The Happy Air marketing team told a press conference at the The Metropole Hotel on Saturday that the airfare is a reasonable 4,000 baht.

The service is expected to prove popular among Phuket’s large foreign community as ‘visa runs’ out of Thailand can be made in a single day with no hotel expense.

Flights depart from Phuket on Tuesdays, Thursdays and Saturdays at 9am, arriving at Langkawi Island at 11am local time. The return flight departs from Langkawi an hour later.

Happy Air’s 2,500-baht flights from Phuket to Haad Yai have been a success, with passenger numbers increasing on a daily basis.

The flight is already popular with members of the civil service and Happy Air expects to see more foreign tourists taking advantage of the service soon.

Happy Air also plans to begin service between Haad Yai and Malaysia’s Subang Airport in the near future, the press conference was told.