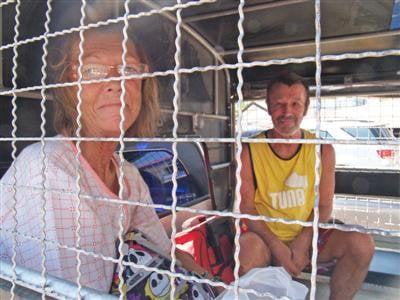 PHUKET CITY: A homeless couple from Sweden face imminent deportation for overstaying their permits to stay.

Officers found the couple lying on the sidewalk in front of the Bangkok Bank branch in Kata at 1pm last Wednesday.

Asked to produce their passports, only Ms Strand was able to do so.

Her passport revealed that her permit to stay expired January 19.

Both Mr Lundqvist and Ms Strand were in rough shape when found by police.

Ms Strand’s hair was all tangled up and Mr Lundqvist had numerous cuts and abrasions on his arms and legs.

On Thursday, Chalong Police took the couple to Phuket Court where they were charged with breaking immigration laws.

The couple, who are not fluent in English, told the Gazette they had stayed at the Bamboo Village resort in Kata until their money ran out.

Staff at the resort told the Gazette the couple stayed there for two months, August and September, before renting a small room near Karon Temple to save what was left of their money.

They later moved into another small room nearby the resort, but were most often seen on the streets of Karon, the staffer said.

“They were always drunk. Sometimes they asked me for money to buy alcohol,” the resort owner said.

Ms Strand told the Gazette they didn’t have enough money to extend their visas because their wallets were stolen last month.

The couple had just three baht between them at the time of their arrest, she said.

Despite their run of bad luck, the couple hope to return to Phuket some day.

“If we are sent back to Sweden, I will get treatment for my arthritis there, but we will be back because we love it here. The police have been very good to us,” she said.

They will be deported as soon as the Swedish Embassy arranges air tickets for them, he said.