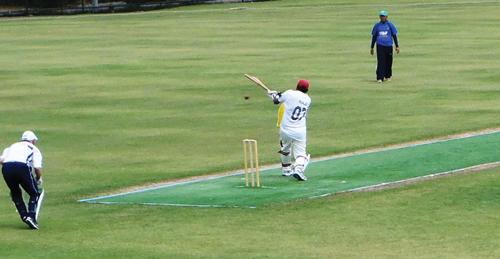 PHUKET: In the final round robin match before the finals, Patong played TNT on Sunday, May 5 at Phuket’s premier cricketing facility, the ACG.

A Patong win would see them finish top of the league, whereas TNT were hoping to secure a confidence boosting end-of-season win. Patong ran out comfortable winners in the end, posting a solid total of 272 for 8 wickets from their 35 overs, with TNT falling almost one hundred runs short in their reply.

After winning the toss, TNT elected to put Patong into bat. Patong, knowing they had already qualified for the final, adopted a unique way of selecting the batting order with the players chosen at random from cards numbered one to 11.

Richard Desmond (35) and Mike Khan (17) drew the opening spots and posted a solid start until Khan fell in the 8th over with the score on 42. Pao Suttiprapha’s (0) time in the middle was short-lived, surviving only two balls. Seemant Raju (28) then combined with Desmond to take the score along to 89 until Desmond was run out. Paddy Morton, one of Patong’s dominant players, also failed to make an impression when he was well caught by Thai youngster Pan Sriwang.

Manish Sadarangani (33) and Neil Quail (52) then combined for a match winning 100 run partnership during a 10 over blitz, until Quail was deceived by the flight of an Andrew McMillan leggie.

Sadarangani fell shortly thereafter in the 30th over. However, Dave Watson (35 not out) and Soton Alamin (26) then put on 56 runs in the final five overs to take Patong’s total to an intimidating 272-8 from their 35 overs.

After the lunch break, TNT set out to chase down the large Patong total.

They got off to a flying start with openers Roshan Jayasuria (66) and Andrew McMillan (40) posting a 109 run partnership in just 11 overs, before McMillan was bowled by Paddy Morton’s leg spin.

Jayasuria’s flamboyant innings, which included 6 fours and 4 sixes, eventually came to an end when he was bowled by Thai youngster Pao Suttiprapha in the 17th over. TNT captain Simon Wetherell (18) tried to maintain the required run rate until he too fell victim to Pao. TNT then lost Simon Samaan and Pan Sriwang cheaply with only Anthony Du Pont (13) providing any further resistance. The TNT innings eventually came to an end in the 26th over, with 179 runs on the scoreboard. Pick of the bowlers for Patong were Pao Suttiprapha (3 for 36) and Soton Alamin (3 for 9).

The result means Patong finish top of the league table followed by Laguna. These teams will meet each other in the final at the ACG on Sunday, May 12 at 9am. Laguna will be looking to defend their title from last season, while Patong will be feeling confident of wrestling it away after convincingly beating Laguna in their last outing.