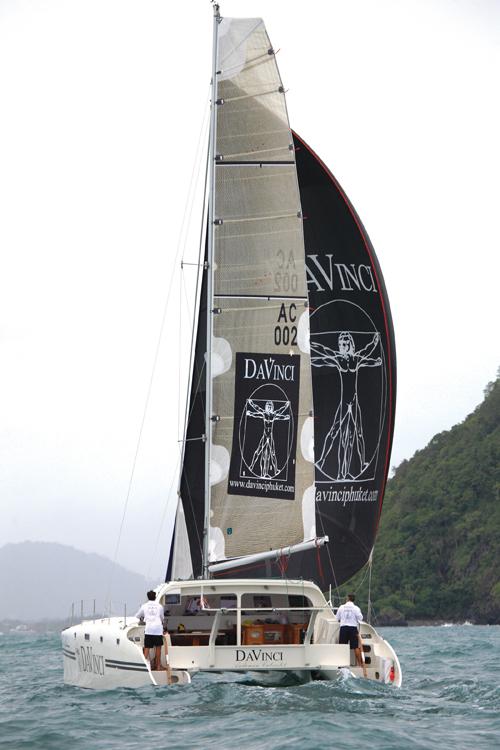 The event is celebrating its tenth anniversary and will feature four days of world-class yacht racing and four nights of magical, beach-side parties at the five-star Cape Panwa Hotel

Principal Race Officer Simon James is planning a variety of short courses and island courses, making the event competitive and fun for all classes.

A strong line-up of IRC boats, cruisers, sportsboats and multihulls will be taking part, and in keeping with tradition, the regatta will host the best classic class in Southeast Asian waters.

“What’s unique about Phuket Raceweek is the race area. The east coast delivers good winds at this time of year and the racing area allows for a variety of race courses – something to suit all boats,” commented Simon James.

“The race area also allows us to set interesting courses for the classic yachts, giving them the opportunity to ‘stretch their legs’ and show off their elegance,”

The organizers of the 2013 Cape Panwa Hotel Phuket Raceweek are proud to announce a stellar sponsorship line-up this year, with some long-term supporters back on board and the return of a popular past sponsor.

After a brief hiatus, leading luxury automobile makers, Jaguar Land Rover Automotive PLC are back as a co-sponsor for 2013, and this is their third year sponsoring the event.

Joining them as co-sponsors is the Tourism Authority of Thailand as well as DaVinci Yacht Charters, who are also competing with their DaVinci catamaran – which is reigning class champion. The Sports Authority of Thailand have long been a supporting authority but this year, for the very first time at any regatta in Thailand, they have become a sponsor and are offering valuable support.

“Sponsorship is essential to the success of any event and we are very pleased to welcome back many of last year’s sponsors. We’re particularly excited to welcome back Jaguar Land Rover and the Sports Authority of Thailand in their expanded role and we look forward to working with all to make this a great 10th anniversary regatta,” said Byron Jones, managing director of Media Business Services, co-organizer of Cape Panwa Hotel Phuket Raceweek.

The Raceweek ‘Regatta Village’ on the beachfront at Cape Panwa Hotel is taking shape. Site meetings have been conducted and planning is well under way to create a unique one-stop village center for the event, which will be Phuket’s own version of the America’s Cup Village.

Early bird registration is open until June 14 with a boat entry set at 10,000 baht and crew tickets at 3,850 baht. Entries are flowing in, with many regular favorites having already signed up to take advantage of the early bird offer, plus some new boats that haven’t taken part before. A strong classic class is lining up for some ‘green season’ fun, and organizers are seeing a good spread of entries across all the classes.

The Junior Phuket Raceweek will be run in parallel with its 10-year-old bigger brother on July 19 and 20, and is expected to welcome over 30 youngsters competing in optimists, bics, toppers and lasers.