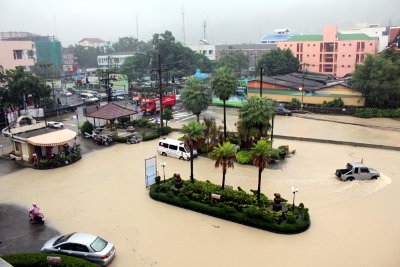 The news follows Patong Hospital flooding during the downpours last week, prompting Governor Tri and MP Prompong to visit the facility to hear for themselves what is being done to better protect Patong’s only hospital from further flood damage.

Dr Muanprae Boonlorm, acting director at the hospital, explained that the heavy flooding across Phuket last Wednesday and Thursday caused widespread disruption elsewhere in Patong, but did not overly affect the hospital.

Although the outdoor and underground car parks flooded, electricity, water and medical gas supplies operated as normal, she said.

“Staff accommodated on the hospital grounds were worried as the building floods when it rains heavily. Also the car park is vulnerable as it is a low-lying area without any protection,” Dr Muanprae explained.

“In addition to installing flood barriers, backup systems for electricity and water supply and an automatic pump system are to be installed to remove floodwater,” she said.

“The construction company is due to complete the project by January 7 next year,” Dr Muanprae added.

Governor Tri assured that the Patong Municipality will install flood barriers as well as raise the level of the adjoining Phang Muang Sai Kor Road and install roadside storm drains to prevent future flooding around the hospital.

“Once completed, 90 per cent of the flood problem will be resolved,” he said.

The flood defense project was launched in September last year, following floodwaters in August destroying important equipment, especially in the hospital’s main power control room, which was located in the basement.

The floods in August 2011 forced staff to evacuate about 40 patients from the hospital as a precaution.

Staff at the hospital confirmed to the Phuket Gazette today that, despite continuing downpours over the weekend and this morning, the hospital was not suffering any flood damage presently.