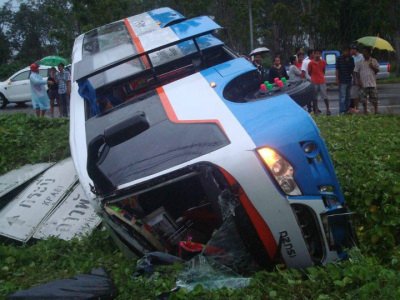 Police accompanied by rescue teams from Wat Gao and Phu Nga arrived at the scene to find the bus on its side in a roadside drainage ditch.

Rescue workers extracted the driver and the 15 passengers trapped inside the bus and took them to Phang Nga Hospital for treatment.

Col Sanae told the Phuket Gazette this morning that 16 people were treated for minor injuries.

“Most have already been discharged from hospital. However, doctors are keeping five patients with limb injuries in for observation. They will probably be discharged later today,” he said.

“The bus driver was not drunk,” said Col Sanae, adding that Wiwat Jakkaratch, 43, from Phattalung was an experienced driver.

“The road surface was wet and slippery. The bus lost traction when going into the curve and flipped onto its side,” he said.