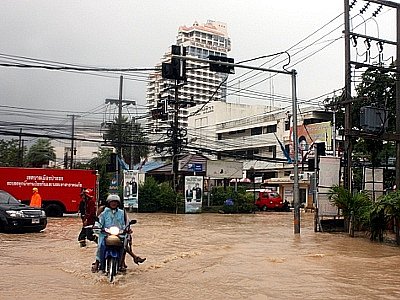 PHUKET: Flooding of the basement at Patong Hospital forced doctors there to evacuate about 40 patients as a precaution, transferring them to facilities elsewhere in Phuket.

“Some of them were transferred to Vachira Phuket Hospital [in Phuket Town], while others were discharged early so they could go home,” said Hospital Director Dr Phumin Silaphan.

Heavy rain on Thursday saw flood waters spill over from the hospital’s car park into the basement of the main building.

“The generator room was flooded with water more than a meter high. It has now receded to about half a meter. We are pumping the water out, but it is expected to take a while,” Dr Phumin said late yesterday.

“We have also shut down our operating theater, x-ray room and delivery room as a precaution, because without the generator we have no backup power in case the main electricity supply goes offline,” Dr Phumin said.

“If the heavy rain slows down, we expect to be fully operational again by Monday,” he added.

Department of Disaster Prevention and Mitigation (DDPM) Phuket chief San Jantharawong said that although flood waters across Phuket were receding, his officers were still on watch for landslides on hillsides and known risk areas in Patong, Kamala and Kathu.

“If the hard rain continues, it may cause more landslides,” he said.

The DDPM-Phuket office has received many reports of flooding.

“The worst hit areas seem to be Chalong, Thepkasattri, Kamala and Patong,” he said.

In response, the DDPM-Phuket is considering the whole province a flood and landslide risk area, said chief San.

“We have ordered all local authority rescue teams to be on standby, ready to respond to emergency calls in their areas,” he said.