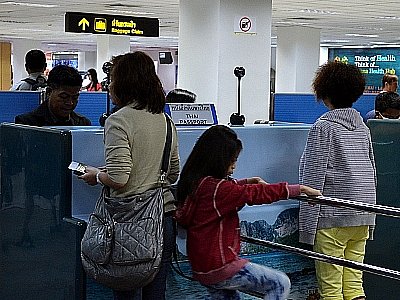 PHUKET: Immigration officers at Phuket International Airport will not necessarily be stringent in enforcing the new requirements for 60-day tourist visas to Thailand, the Phuket Gazette has learned.

Popular expat forum ThaiVisa.com published the changes yesterday, saying that all embassies and consulates abroad were notified of the changes and that the new requirements were effective immediately.

“The Royal Thai Embassies, Consulates and Consulates-General will from now require a confirmed airline ticket with flight numbers and dates of entry/exit, plus confirmed hotel reservations with name and dates of checking in/out,” said the report.

The required documents were listed as:

However, an officer at Phuket International Airport Immigration this afternoon told the Phuket Gazette, “We are not going to ask each and every person landing in Phuket for evidence of a hotel reservation or a return air ticket. We will only ask if you look suspicious.

“It doesn’t matter what kind of visa you have; if you look suspicious, then it is our job to check,” he added.

The officer did not elaborate on how one might “look suspicious”.As if to confirm selectivity in enforcing the rules, she highlighted, as an example, that “even backpackers may not be asked [for the required documents].”

“We will check your travel history in your passport, then let you go. Thailand tourist visas are for tourists to come and enjoy holidays in our kingdom,” he said.

The officer added that any information provided about where the tourist will be staying will be recorded.

“This makes it much easier to find or contact people in case something happens, such as they go missing, are injured or need any help,” he said.

Regarding whether the new rules apply to “visas on arrival” – the most common visa used by tourists coming to Thailand – the Ministry of Foreign Affairs directed the Phuket Gazette to call Immigration at Suvarnabhumi Airport in Bangkok.

The immigration officer at Suvranabhumi Airport, told the Gazette, “For visas on arrival not exceeding 15 days, you are required to prepare:

“In case you are not staying in a hotel, you will need to provide the address of a friend, or where you will be staying while you are in the Kingdom.

“You do not have to provide any letter of invitation; just a valid address in Thailand filled out on the visa application form will be fine,” the officer said.

“Any people looking to stay in Thailand longer than 15 days should contact their nearest Royal Thai embassy or consulate [about] which type of visa would suit their requirements,” the officer added.