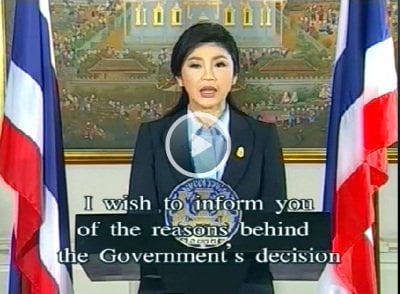 PHUKET: Prime Minister Yingluck Shinawatra this evening addressed the nation in a televised broadcast to explain the Thai Government’s reasons for invoking the Internal Security Act ahead of this weekend’s mass anti-government rally in Bangkok.

To see the address, complete with English subtitles, click here.

Chief among the Prime Minister’s concerns were:

“Public gatherings and protests, especially those arising from public grievances, is provided for and protected by the Constitution. But such public gatherings must be peaceful, without the use of weapons, and within the boundaries of the law. I am ready to listen to any ideas and proposals, and to work together to solve any problems.

“But if a large number of people is mobilized by incitement, led by those who seek to overthrow an elected government and democratic rule – which is against the Constitution – and there is evidence that violence may be used to achieve those ends, then this is a case of national security. It is the government’s duty to preserve law and order, protect the lives and property of everyone – including those who are protesting and those who are not involved.

“But most importantly, the government must protect the democratic system under the constitutional monarchy. This is the reason behind today’s Cabinet decision.”

The Cabinet approved the enforcement of the Internal Security Act in three districts in the capital – Dusit, Phra Nakhon and Pomprab – with immediate effect from today through next week in order to maintain law and order during the protest.

Specifically, Section 16 of the Internal Security Act allows the Cabinet, headed by the prime minister, to set up a military command center in specified areas in order to “prevent, suppress, eradicate, and overcome or mitigate the occurrence that affects internal security”.

The British Embassy in Bangkok has reviewed its travel advisory for the area, noting that: “A large anti-government demonstration is expected to take place in the Royal Plaza at the intersection of Si Ayuthaya Road and Rajdumnoen Nok Avenue from 0900 on 24 November.

“The demonstration, which could attract up to 100,000 demonstrators, may run on until 25 November and is likely to cause serious disruption in the local area which includes Parliament, Government House and tourist attractions such as Dusit Palace, the Benchamabophit (Marble) Temple and Dusit Zoo.

“As a result of the demonstration the Internal Security Act (ISA) has been invoked and is now active in the Dusit, Pom Prab and Phra Nakorn districts of Bangkok. This is likely to mean an increased police presence and restriction of movement in these areas and the possibility of searches of cars or individuals and ID checks.

“Under the act the authorities can also limit the use of electronic equipment and, if necessary, impose a curfew. You should avoid this demonstration and any other protests.”

Earlier today, Apharat Chartchutikumjorn, Pitak Siam coordinator for Phuket, announced that up to 500 supporters will be departing Phuket to join the rally.

Ms Apharat estimated that more than 100,000 people from across the country will join the protest, which will be led by the retired general Boonlert Kaewprasit.

“Gen Boonlert said that the protest will likely last only one day, maybe two days, but not longer,” she explained.