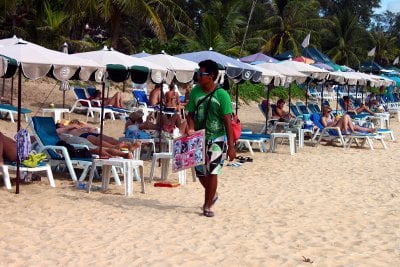 PHUKET: Phuket Vice Governor Chamroen Tipayapongtada has ordered every municipality and local administrative organization on the island to report all of their beach related issues to him by next week.

The move is an attempt to redress a slew of problems ranging from floating lanterns affecting air traffic at Phuket Airport to illegal beach vendors counter-suing officials as a “stall tactic”.

The news follows a meeting at Provincial Hall on Monday, where Vice Governor Chamroen heard a long and varied list of complaints by local authorities.

Fireworks and floating lanterns – the latter especially enjoyed by tourists and celebrants during the annual Loy Krathong Festival, to be held this year on November 28 – were identified as another source of complaint.

“The use of fireworks and floating lanterns must be restricted. I would like to permit such activities only for special celebrations,” said Karon Deputy Mayor Itthiporn Sangkaew.

The complaint by Deputy Mayor Itthiporn follows Winai Chidchiew, the chief of Karon Subdistrict (Kamnan), being accused of allegedly threatening municipal officers into allowing firework displays to be held late at night in Karon.

“Also, tuk-tuks and taxis in the popular tourist beach areas of Kata and Karon need constant supervision and steps need to be taken to stave off damage to the environment,” Mr Itthiporn added.

Concern was raised that hotels in Sakoo and at Mai Khao, on Phuket’s northwestern shore, allowed guests to set alight the floating lanterns and fireworks, releasing them skyward, potential affecting air traffic arriving at Phuket Airport.

As a result, it was requested that such activities be banned from being held within a six-kilometer radius of the airport to ensure air traffic is not affected, and that the Provincial Office issue a formal notice to hotels in the area.

Winai Dechanupap, an officer at the Sakoo Tambon Administrative Organization (OrBorTor), raised another troubling issue: illegal beach vendors counter-suing local authorities as a stall tactic to allow them to continue trading until their case is heard in court.

“More beach vendors have set up shops on Nai Yang Beach. We are trying to stop them, but it seems they want to present their cases in court. The process of a judge hearing the case can take years, thus allowing them to continue to operate their businesses until the judge hands down a decision,” Mr Winai explained.

An officer from Rawai Municipality explained that Rawai Mayor Aroon Solos is currently facing legal action for Rawai Municipality attempting to repair a badly damaged section of footpath that was washed away by strong waves over the years.

“The mayor is being sued by a developer who claims to own the land,” the officer said.

Concerns were also raised about untreated wastewater being piped into the sea at Yanui and Nai Harn Beaches, and at Koh Racha Yai Island – all three of which are popular swimming and snorkeling locations for tourists.

V/Gov Chamroen gave all local authorities until next week to file their list of complaints.

“Then we will discuss what action to take and we will dedicate one beach as a ‘pilot beach’ to launch a beach management project,” he said.