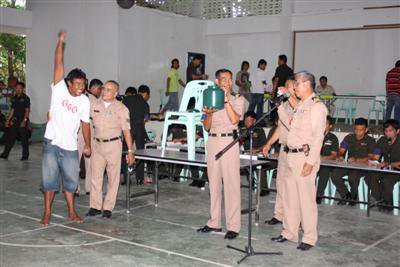 PHUKET CITY: Over 1,700 young men presented themselves to draw lots in the annual military conscription lottery that took place in Phuket from April 1 to 4.

When they reach the age of 21, all Thai men are required to register with the recruitment office in the districts where they reside.

This year 1,793 young men presented themselves to fill Phuket’s provincial allotment of 304 soldiers. Another 29 youths voluntarily signed up for military service.

Col Seksaan Konkeaw, Royal Thai Army registrar for Phuket, told the Gazette that current requirements are that the conscripts be at least 160 centimeters tall with a chest measurement of at least 76cm around.

Prospective soldiers can be exempted for a wide range of reasons, including testing positive for medical conditions like HIV/Aids and being transgender.

Under the longstanding system, those who qualify must line up to draw balls from a container in a high-energy atmosphere not unlike that of a television game show, with scores of family members and friends looking on and cheering.

Those who draw black lots are exempted, while those who get red are conscripted.

In Phuket, conscripts are assigned to the Royal Thai Navy Third Area Command in Phuket, the Army base in Phang Nga or the Air Force base in Pattani. They go through about two weeks of basic training before being placed on active duty for two years – one year in the case of those who hold bachelor’s degrees.

Those with bachelor’s degrees also have the option of voluntary registration, followed by six months’ military service.

None of those who registered expressed any fear of being assigned to Pattani because they were loyal Thais ready to do what was necessary to protect national security, Col Seksaan told the Gazette.

New recruits get a salary of around 5,000 baht per month, accommodation and three square meals a day. Basic training is not as grueling as it was in years past and is strictly tailored by Ministry of Defense regulations to develop mentally and physically strong servicemen, he said.

Among those present at Phibul Songkraam School to cheer on a friend in his once-in-a-lifetime moment was curvaceous 25-year-old Lersuk “Group” Russameepra-sarn.

A resident of the Bangneaw area in downtown Phuket City, Lersuk is a ladyboy who works at the well-known Simon Cabaret in Patong.

She went through the conscription process last year and was exempted on the grounds that she had already gone through complete gender re-assignment surgery. Most transgenders in Thailand are granted such an exemption, regardless of whether they have undergone surgery.

“I don’t think I could be a soldier as it would cause too much turmoil in the unit and I wouldn’t want to be harassed by other soldiers,” she said.