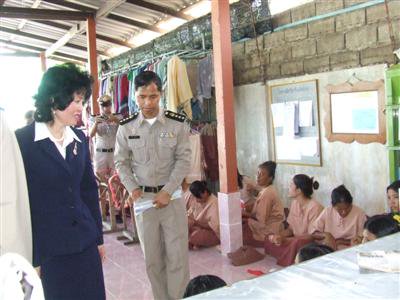 The wide-ranging program, including academic and vocational classes as well as a moral training session, is a good break in the tedium of life behind bars for those attending.

In all, 55 men and 25 woman volunteered for the program, which was organized by the Phuket chapter of the Thai Red Cross Society.

The Phuket chapter is currently chaired by Thaisika Phraisa-ngop, the wife of Phuket governor Wichai Phraisa-ngop.

It is hoped the training will serve to reinforce in the inmates the traditional Thai values of honesty, sacrifice, humility, discipline and kindness – qualities that will hopefully stand them in good stead when they are eventually reintegrated back into society.

The Thai scouts’ moral code also places great emphasis on one’s love of the nation, religion and HM the King.

The Red Cross provided a budget of around Bt12,000 for the program, which enabled the government to provide a range of experts to conduct the various classes and lectures during the “camp”.