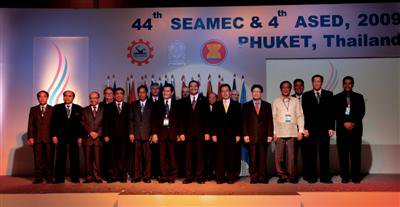 The conference, which began on April 5, aims to discuss education policy and co-operation on projects throughout South East Asia, a region estimated to contain at least 3 million children and 34.3 million adults without any education.

Representatives from 19 countries were in attendance, with the education ministers of the 11 SEAMEO member countries of Thailand, Indonesia, Cambodia, Brunei, Laos, Malaysia, Myanmar, the Philippines, Singapore, Vietnam and Timor-Leste joined by representatives from Australia, Canada, France, Netherlands, New Zealand, Germany, Norway and Spain.

On Tuesday the ministers observed teaching at Satree Phuket School, the British International School and Phuket Vocational College, before enjoying a dinner at Phuket FantaSea that night.

Malaysia will also support four new education projects in other countries around the region, he said.

As current SEAMEC president, Thai Education Minister Jurin Laksanawisit chaired the conference. He announced plans to develop Thailand is a regional educational hub, claiming there were already 20,000 foreigners studying in the country.

Deputy Prime Minister Korbsak Sabhavasu re-affirmed Thailand’s commitment to the country’s “15 Years of Free Education” program. “Thailand’s policy is to provide 15 years of free qualified education for poor children, with an initial budget 19 billion baht. Besides that we plan to improve standards of education, teachers and the curriculum in the next term,” he said.