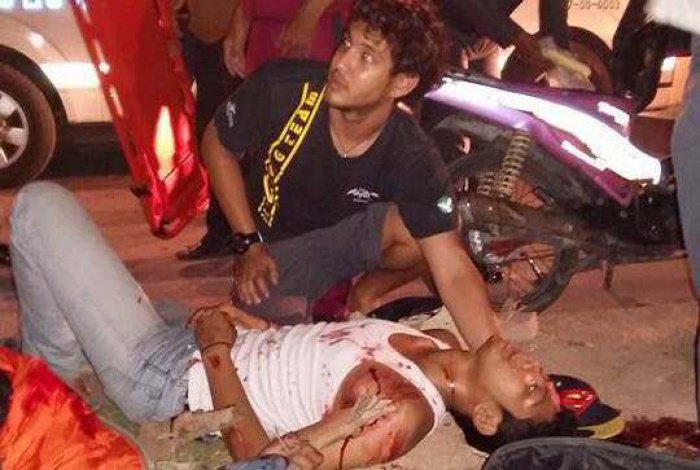 PHUKET: A shooting in the parking lot of Chalong Pier left one man dead and another in critical condition last night.

Illyas Malee, 28, was pronounced dead from a bullet wound to his neck on arrival at Vachira Phuket Hospital, while Humdee Jeklek, 18, was treated for wounds to his shoulder and leg.

“At the scene, we found a blood stained jacket, two hats, the shells from three rounds of 9mm ammunition and a Honda Wave motorbike,” said Lt Cholada Chokdeesrijan of the Chalong Police.

Given his condition, Mr Humdee has not yet been able to give any statement to police about the incident.

“There were a number of witnesses who were able to provide an account of what happened,” Lt Cholada said.

“They told us that the two men had gotten on their motorbike and were about to leave the parking lot when three men on another bike appeared. The men shot Mr Illyas, who was driving, and then shot Mr Humdee twice.”

The three suspects fled in the direction of Chalong Circle.

Another witness told police that the two groups had argued in the pier area prior to the shooting.

“We are reviewing CCTV to follow the escape route used by the suspects, and we are also waiting to question Mr Humdee about what happened,” Lt Cholada said.

Video Report: Police get fright as 20kg python turns himself in

Island to get 200 new police officers