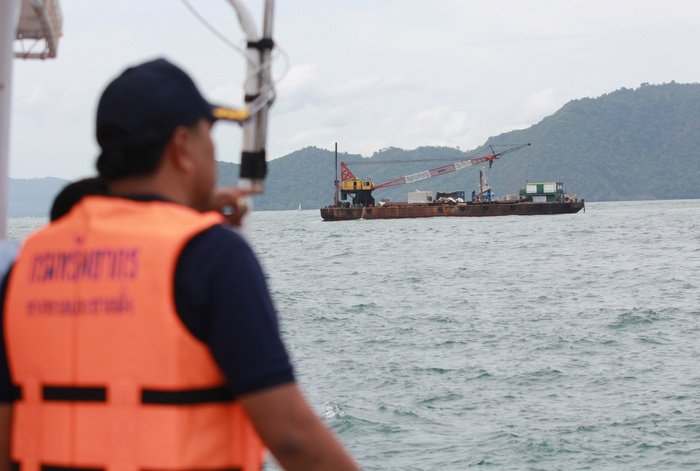 PHUKET: Local officers have filed a preemptive notice to Chalong Police over the recovery of a wrecked 67.6 meter-long mulch-purpose cargo vessel in fear that a significant amount of damage has been done to the coral reefs along Koh Hei, also known as Coral Island.

Sinaran Andaman wrecked into Koh Hei on July 8 in rough seas that sank two other boats (stories here and here).

“We observed the recovery process of the ship yesterday and plan to dive the site as soon as weather conditions permit,” Department of Marine and Coastal Resources (DMCR) Phuket office chief Thanet Munnoy said on Saturday. “We are worried about the loss of marine life and have already filed a notice with Chalong Police in case there is need to go to court to be compensated for the damages.”

Andaman Unik, which owns the ship, has hired barges and cranes to recover both debris and shipping containers from the wreckage. The ship itself was expected to be recovered on Saturday, confirmed Mr Thanet.

“They anticipate that it will take another week to recover the rest of the pieces of the ship, debris and containers,” Mr Thanet said. “The recovery and cleanup is the responsibility of the company. However, our duty is to assess marine life conditions.”

At this point Mr Thanet was unwilling to speculate on the amount of damage that could have been done to the coral reefs in the area, though he did voice concern about plastic and foam pieces floating off from the the wreckage.

“We have already found some items washing up on Phuket and some on Koh Lanta. This is a big deal. We will need the help of the Phuket Marine Office to collect all the waste,” he said.

At this stage, officials have yet to estimate the loss of marine life.

Chasing down breeze on Day 2 of Phuket Raceweek