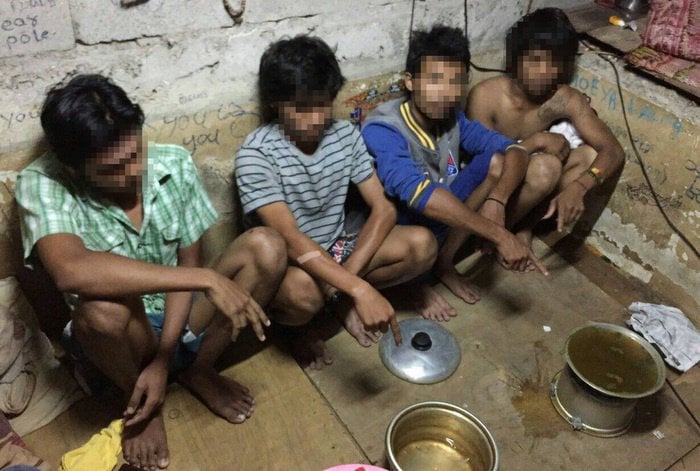 PHUKET: The arrest of a low-ranking Royal Thai Navy officer for smuggling a large shipment of kratom, Mitragyna speciosa, into Phuket’s primary party town of Patong this week is only a flake on the epidermis of a complicated, political and cultural battle against the illegal drug.

The use of the substance in a number of wild concoctions has infiltrated many teen social groups, leading tohigh levels of consumption – more than an estimated 1.2mn since 2011 – which in turn results in almost weekly arrests in Phuket, said Director of the Narcotics Control Board (NCB) Sithisak Kallyanapradit.

To meet consumer demand, dealers have to look beyond Thailand for suppy. Regular raids throughout the country, which include chopping down kratom trees, have led to a ramped up trade across the Malaysian border, one user who lives in the Thai-border province of Narathiwat explained.

“From 2008 to 2012, the number of suspects arrested for illegally importing kratom from Malaysia increased by 39 times, especially in Songkhla, Yala, and Narathiwat provinces,” Mr Sithisak said.

“It is fairly well established that the Kratom Act was put in place due to the government losing money from the taxation of opium. Local preference had moved toward kratom, hurting the opium market,” explained Mr Surphon Patharapagorn, director of the Office of the Narcotics Control Board Division 9.

In fact, the Opiate Freedom Center recommends kratom use to deal with opiate withdrawal.

“Though many present-day users believe that use of the drug originated in the Deep South of Thailand, in fact it has been used as a traditional medicine and part of our culture throughout Thailand since ancient times,” Mr Surphon said.

Part of the association between the South and kratom use is derived from religious misunderstandings in the prominently Muslim part of Thailand.

“I personally believe that the starting point for kratom use was in the Deep South, especially with Muslims, who thought that kratom was not alcohol, and therefore was not against their religion to consume,” one kratom user told the Gazette.

Dr Phiangbunpa Natithamkul, a psychologist specializing in drug addiction at Vachira Phuket Hospital, agreed that there are number of Muslim teenagers who feel less guilty about drinking kratom drinks than alcohol. However, the holy scripture is more sweeping in its ban.

“Kratom is forbidden in our religion,” Piyadet Chuachalard, secretary of the Phuket Islamic Committee said. “It is clearly stated in the Quran that all drugs and substances that make you ‘drunk’ are forbidden, not just alcohol.”

The creation of kratom-based brews first known as ‘4×100’ and later upgraded to more complex drinks known as ‘8×100’ – which uses longkong leaves, meth and number of other ingredients – are thought to have been developed by teenagers in the South, who were struggling with living in the terrorism-torn region. They also turned to cough syrup containing codeine, which was part of the more ‘traditional drink’.

The popular party cocktail 4×100 was thought to have played a part in the deaths of Canadian sisters Audrey and Noemi Belanger on Phi Phi Island earlier in 2012.

The concoction is not considered lethal when made using the usual ingredients of kratom leaf extract, cough syrup, cola and ice, but the alleged addition of the insecticide DEET in the Belanger sisters’ drinks was thought to have been linked to their deaths. A Canadian corner has since refuted these allegations.

“With the strict control of cough syrup containing codeine starting in 2003, teenagers got creative and invented 4×100, which uses kratom juice, normal cough syrup and coke. To this, some other ingredients, such as mosquito spray, are then added,” explained Dr Phiangbunpa.

Users themselves, who all declined to be named, told the Gazette that the powder from inside fluorescent lights, road paint and a number of other chemicals were used in making 4×100.

“We like discovering new ingredients. It makes us feel powerful and better than when we just use the normal ingredients,” one user told the Gazette.

The user in Narathiwat interviewed by the Gazette argued that such creations were ‘stupid’, and that the only way to consume the drug was with coke and cough syrup containing codeine. However, traditionally, people simply chewed the leaves of the trees.

To get a better understanding of the kratom culture in Phuket, the Gazette sat down with a number of confessed users.

“I started taking the drug when I was in secondary school, because that’s what my friends were doing. Even now, we get together to smoke, drink alcohol and drink kratom,” one user said.

“I’m now in my third year of university and drinking kratom almost every night.”

The main draw to the drug was the social connection it provides, he explained. However, things have changed.

“Now, I don’t think it is because of social reasons. I can’t stop drinking it. When I do, my body feels weak and I end up getting diarrhea constantly.”

Another user, who is also attending a university on the island, said that he first started experimenting with the drug during secondary school in Narathiwat.

“I think I become addicted because of the social elements. All the teenagers in the area drink kratom juice,” he said.

Dr Phiangbunpa agreed with the users’ first-hand accounts of why the drug had infiltrated so many people’s lives.

“The main reason people consume the drug is that it becomes part of the way they socialize. However, it also works as a stress reliever,” Dr Phiangbunpa said. “They think they can take the drug and still function normally, but without stress. However, they forget to consider the long-term effects.”

The remaining factors for its popularity are the ease of getting the drugs and the cost.

“It is easy for teenagers to find a kratom dealer, and they believe that it is better than taking ya bah (methamphetamine) or heroin, as there are no clear negative effects to them physically,” Dr Phiangbunpa said.

Kratom is listed as a Category 5 narcotic in Thailand. Narcotics are generally physically and mentally addictive, need increased dosages as the body becomes resistant to the effects, leaves users with withdrawal symptoms and can cause damage to the user’s health, explains Dr Phiangbunpa.

Surveys conducted in 2011, the Narcotics Board estimated that there were 1.2mn active users in Thailand. However, Mr Surphon expects to see that number increase during the next round of surveys.

“It should be noted that kratom is legal in many countries. The plant is not on the list of Single Convention on Narcotic Drug 1961 or the Convention on Psychotropic Substances 1971 of United Nations,” said Mr Surphon.

“The drug is categorized this way in Thailand because of the hallucinogenic and inebriating effects it has,” Dr Phiangbunpa said.

In small doses, the drug works as a stimulant, but high doses are almost always sedative.

“This is because kratom is a serotonin antagonist that inhibits the action of serotonin in the users brain. So long-term use may cause permanent psychiatric illness.”

Dr Phiangbunpa explained that a small amount could give a similar buzz to ya bah – another popular drug on Phuket – while a higher dosage would result in an opium-like effect.

“There are a number of negative side effects that can occur if high dosages are consumed, including fluttering heart beats, stomach pain, chronic constipation, insomnia, anxiety, stress, darkened skin and depression,” she said.

“The long-term psychiatric effects of the drug depend on the dosage and frequency the drug is being used, as well as the users general health.”

Though kratom can be used to ween addicts off of opiates and is far less addictive, users can have withdrawal symptoms.

“Body pain, muscle spasms, depression, anxiety and being quick tempered can all be symptoms of withdrawal,” said Dr Phiangbunpa.

The process of working with a kratom addict who is entering a rehab program is similar to many other programs.

The doctors will first build rapport and get them excited about the process, explained Dr Phiangbunpa. Then they will coach them through both the physical and mental struggles of withdrawal.

“The third step is helping them change their attitude, personality and behavior to become stronger when dealing with social pressure. This can make them feel confident to return back to society and not return to using the drug,” she said. “Finally we observe them and help keep them on a clean path.”

In October 2013, a sub-panel of the Thai Food and Drug Administration (FDA) had yet to reach a decision on whether to remove kratom from the prohibited narcotics list.

The Public Health Minister at the time, Pradit Sintavanarong, said it would take another couple of months to reach a conclusion. However, the move was put on ice.

One of the main reasons for removing the kratom from the list was so that it could be used as a medicine in aiding the recovery of ya ba (methamphetamine) and ya ice (crystal methamphetamine), reported The Nation.

Additionally, the move could help reduce the number of meth addicts in Thailand.

“Legalization of kratom would also reduce the number of people being detained for kratom possession, as well as being wrongly charged with possession,” The Nation reported.

Mr Pradit said the ministry, in its role as an academic body, would focus on the medical properties of kratom in relation to health, rather than issues surrounding its legal use.

However, Pradit stated that there were similar substances with the same medical properties as kratom, thus there was no real need to use it.

There has already been two attempts to de-list kratom, one in 2004 and the other in 2009, but the committee had refused to change kratom‘s status.

While the drug remains illegal, Mr Surphon is bound to continue his battle against the substance and its users and dealers.

“We can combat the drug in a number of ways, though the best way is through education,” Mr Surphon said. “We need to inform the general public, especially teenagers, that the drug can be dangerous. This is especially the case when they start making 4×100 and other dangerous chemical concoctions.”

Mr Surphon pointed out that there was a need for the community to help officers locate kratom trees growing in non-conservation areas in Thailand so they could be removed.

“Also it is essential to take strong action against users and dealers so they are afraid to partake in the drug culture,” Mr Surphon said. “However, lawmakers should also review the possibility of allowing those who use the substance in a traditional Thai way to cure health disorders and diseases to do so.”

Raceweek comes to an end