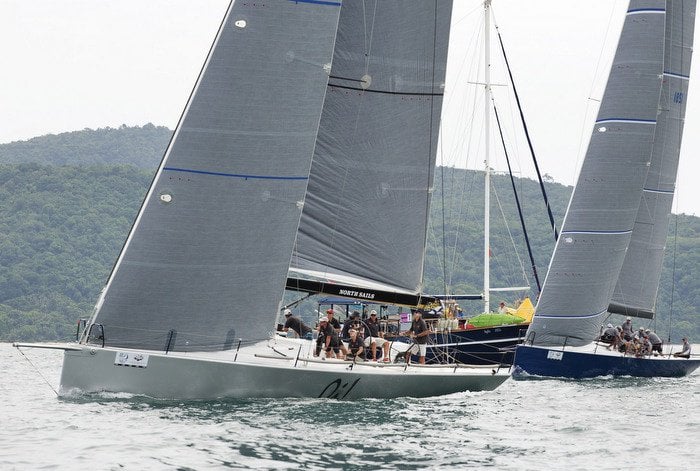 PHUKET: As the start boat for the 2015 Cape Panwa Hotel Phuket Raceweek left the anchorage yesterday morning there were a lot of anxious faces on board. After a tricky and tiring first day, where the Wind Gods delivered seven knots at best and for most of the day a little less, the forecasts for Day 2 were no better. In fact, they were worse.

But forecasts are forecasts, they’re educated guesswork. They’re not set in stone and they’re not always right. At least that’s what the 36-strong fleet were hoping as they made their way to the start area for a planned 10am warning signal.

And right on cue, at 10am, Principal Race Officer (PRO) Simon James raised the AP.

Springing into action, James dispatched his boats and support crew around the course area while the start boat itself motored off hunting for wind. Regular fleet updates were issued, but the much-sought-after wind didn’t arrive, and after more than three hours, James sent the Cruising and Charter/ Bareboat classes home.

Almost as a last hope, the start boat motored back to Cape Panwa and took position off the safe water mark, where the wind was putting in a showing. With just four to five knots on offer, most sailors chose not to race when given the option over the radio by the PRO, and class-by-class they were sent back to the anchorage. All except IRC Racing I, who were game for the challenge and keen to put more races on the scoreboard.

After more than four hours waiting, drifting and waiting some more, IRC Racing I were off on a two-lap one-mile windward/leeward course. The only race of the day and just their second of the series so far.

Close together at the start, Oi! managed to work out a lead and rounded the windward mark first and lead back down the course. A problem with their mainsail saw crew scale the mast to fix, all the while Kodo was eating up the gap. However, it wasn’t enough in the light breeze and Oi! recovered to cross the line first and convert to a win on corrected time.

Two races completed for IRC Racing I at the half-way mark and just one for the rest of the fleet, is a scorecard unheard of at Phuket Raceweek. Known for its consistently good sailing conditions, 2015 is proving to be a test of mettle and patience for sailors and the race management team alike. Fingers are being crossed by all for some better conditions today.