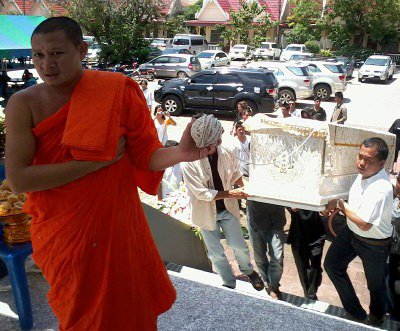 PHUKET: Sunisa “Nong Som” Saiyoy, 17, who was strangled to death in her home on July 10, was cremated yesterday at Wat Tai.

At the ceremony Khaneung Saiyoy, Nong Som’s father, thanked the police for quickly finding the killer Kittikhun Wonghajak, who has confessed to the crimes.

“I would also like to thank the village headman, Tambon chief and Chalong Municipality Mayor for taking good care of us and helping to quickly close the case,” Mr Khaneung said.

“I’m still devastated at having lost my daughter in this way. I would like to advise everyone to not trust anyone or anything. Take care of your loved ones, don’t let them be alone – always make sure your house is secure,” he said with tears in his eyes.

Nong Som, who was suffering from a headache on July 10, had stayed home from helping her parents sell fruit. She was home alone when Kittikhun allegedly broke into the house robbed it, attempted to rape her and killed her.

“I really am sorry that Nong Som died in this tragic way,” one of Nong Som’s friends from Wichit Songkarm School who attended the cremation ceremony said. “Though she didn’t talk a lot, she was a really nice person. She got along very well with everyone.”

Lt Col Narong also clarified reports about the injuries Sen Sgt Maj Boonlerd Pueakphong sustained during the re-enactment of the crime Saturday, which drew a crowd crying out for Kittikhun’s blood.

“Sen Sgt Maj Boonlerd Pueakphong was sent to Phuket International Hospital for treatment after the re-enactment, where two of his fingers on his right hand were broken. However, he explained to me that he did not get attacked by any of the villagers. He said he fell down and hit his hand on the door of Nong Som’s house,” Col Narong said.

Col Naron explained that the re-enactment got out of control due to how quickly the crowd swelled in numbers after the arrival of Kittikhun.

“When the first police team arrived at the scene there were only about 100 villagers there; most of them were women. But we still ordered 80 officers to come and help [with crowd control]. When Kittikhun arrived a lot more villagers showed up to watch – most of them were angry and ready to attack Kittikhun.

“Normally we would analyze the situation before the re-enactment. If there are more than 200 to 300 people, we would cancel it to ensure the safety of the suspect. But this time the number of people who came to watch quickly increased after the suspect arrived, and the situation got out of control.

“It was difficult to get the suspect away from the crowd, but we managed,” he said.

Three more suspects in custody for shooting of Phuket cop