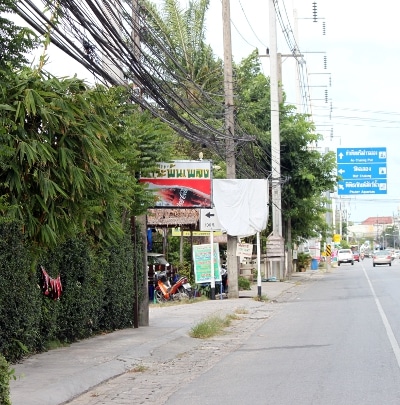 PHUKET: Police in Phuket have arrested three more suspects wanted for the shotgun shooting of a Chalong police officer in a live music venue last month.

The victim, Snr Sgt Maj Nikom Jeenyuen, received shotgun wounds to the neck, chest, stomach and arm in the June 19 shooting at Saraphanpleng Bar, a live music venue on Patak Road, about 300 meters from Chalong Circle.

One suspect, 28-year-old Suppanet Sukkaew of Surat Thani, was caught and promptly arrested in Karon the night of the shooting.

Checking up on the progress of the investigation, the Gazette learned today that three of his accomplices are now in custody.

Col Boonlert said Yoethin “Teng” Ritthinil, a 28-year-old also from Surat Thani, was arrested in his home town in that province on July 9.

While at 11pm on Friday, 33-year-old Wutthichai “Aod” Songsri from Trang and Nakhon Sawan native of Khuanmuang Fuangfoong, also 33, surrendered themselves at Chalong Police Station.

The fifth suspect, for whom a warrant was issued on July 2, together with those already placed under arrest, to date remains at-large.

All four suspects, currently in custody, have denied the charges including attempted murder, weapons violations and obstruction of a law officer in the line of duty.

However, witnesses at the event said that at about 1.45am on June 19, the group of five men became angry when the band refused to play a song they requested.

Lt Col Boonlert Onklang of Chalong Police said the group then went to their car and returned with firearms, the exact number and types of which are unknown.

“They pointed their weapons into the air and fired before shooting in the direction of the entrance. Officer Nikom, who was standing there, was hit,” said Col Boonlert.

The five men then got into a car and headed toward Karon.

Following the removal of the shotgun pellets, Sgt Maj Nikom was transferred to Vachira Hospital for recovery.

The Gazette has learned that he has been discharged from the hospital and is now recovering at home.