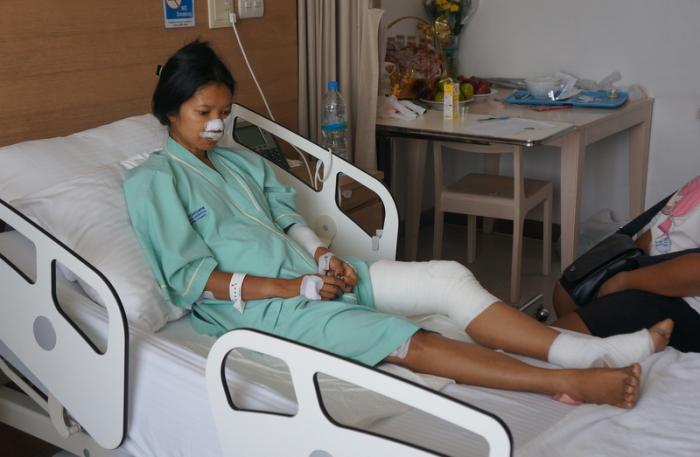 PHUKET: The driver of a car that killed a German man and severely injured his Thai partner in Kata last year will walk away without serving any jail time.

The dramatic court case over the death of Andreas Walter and the severe injury of his Thai partner Patcharin Lammai ended on October 6 at Phuket Provincial Court.

Jakarin Rodpradit, the driver of the vehicle that ran over Mr Walter after colliding with the couple while they were riding a motorcycle on the way to Kata from Chalong, was ordered by the court to pay a 7,500 baht fine and 1.8 million baht as compensation. He also received a two-year suspended jail sentence.

“I was conscious, but unable to move immediately after the accident. The driver didn’t stop; he kept trying to drive forward over the top of my boyfriend. I couldn’t do anything,” Ms Patcharin told the Phuket Gazette from her hospital bed several days after the incident.

Police took Mr Jakarin’s driving licence at the scene on December 3 and then allowed him to return to his vehicle and go on his way. They reportedly did not conduct a blood alcohol test.

However, Ms Patcharin alleged that Mr Jakarin told witnesses that he had in fact been drinking before the incident, but that he was not drunk.

In a subsequent interview with police on December 8, Mr Jakarin reportedly denied responsibility for the crash, telling police that Mr Walter was in fact the one driving recklessly and had cut him off.

About a week later, Ms Patcharin went to police with CCTV footage and eye witness statements in an effort to prove that Mr Jakarin was at fault. When faced with the new evidence, Mr Jakarin confessed and was charged with reckless driving causing death and injury without stopping and assisting the victims as well as property damage.

He was subsequently released on bail.

“I want this case to serve as an example to everyone that people cannot be killed on the roads by reckless driving without the perpetrator facing serious consequences,” Ms Patcharin said.

“If it was a normal crash, and the man had stopped, Andreas might still be alive. Maybe he just thought that I was some bar girl with a tourist, so he didn’t care.”

Relatives of Mr Walter in Germany hired a lawyer to fight the case for them, demanding 1.3 million baht in compensation for Mr Walter’s death. Ms Patcharin also demanded 800,000 baht compensation for her injuries.

Mr Jakarin requested a period of one month to consider the demands. A final settlement was then reached to compensate Mr Walter’s relatives in Germany with a 1.3 million baht payout and 500,000 baht for Ms Patcharin.

“Mr Walter’s relatives received the full amount that they had demanded, but I reduced my demands because I just wanted things to end peacefully,” Ms Patcharin told the Gazette in the court room the day the trial concluded.

However, Ms Patcharin’s relatives said they were astounded at the final verdict, having expected a jail sentence of several years to be handed down to Mr Jakarin.

“Really, no jail time at all? He killed someone, albeit unintentionally, and seriously injured another. I can’t believe he only had to pay 7,500 baht and wasn’t locked up. A two-year suspended sentence is nothing. I don’t understand why,” Ms Patcharin exclaimed after the court’s verdict was read out.

“At least some prison time might have been appropriate. However, I respect the court’s judgment,” she said.

The lawyer representing Mr Walter’s German family said they would not appeal.

“The family has been awarded the compensation that they demanded. His mother is old, and travelling to Thailand just to pursue the case is not an option,” said the lawyer, who requested anonymity.

Ms Patcharin added that she also would not appeal, and instead would try to exercise forgiveness.

“The money cannot bring my partner back. Even so, I do not get any of this. It is all for his relatives in Germany. However, I am Buddhist so forgiveness is important,” she said.

“I hope this is at least an example that people cannot just get away with something that was their fault,” she added.

Ms Patcharin recounted that as well as initially denying being at fault, Mr Jakarin and his family claimed that she was just a bar girl.

“They looked down on me and said I was just trying to get money out of a foreigner’s death,” she said. “I don’t understand why Thai people look down on other Thais like this. That is why I used my own money to hire a lawyer and fight the case.”

“At least it has ended peacefully. Even if Mr Jakarin doesn’t serve any jail time, it will be a life lesson for him. He had to spend his time and money for his defense. I only hope he will be more responsible in future,” she said.

Upon conclusion of the court proceedings, Mr Jakarin expressed regret, as well as gratitude, that the case had concluded peacefully.

“I apologize for the loss. Although I don’t have to serve jail time, it has cost me a lot. I won’t easily forget,” he said.