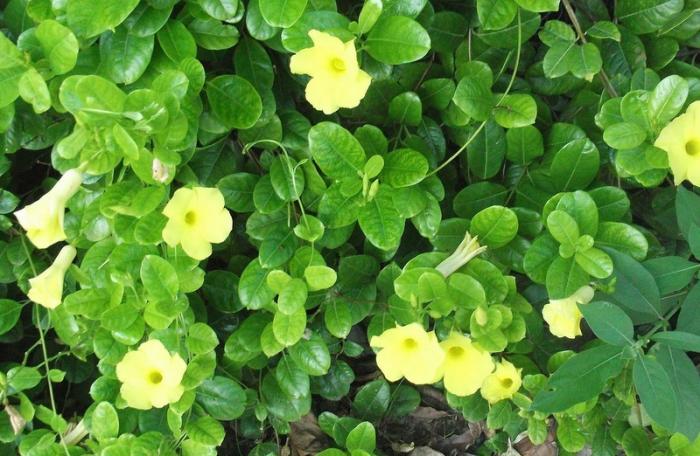 PHUKET: A good friend of mine once had a roof garden in Phuket, with trellises completely covered in a vigorous climber replete with lush green foliage and masses of golden trumpet-shaped flowers.

The growth was so dense that it was home to at least thirty pairs of nesting sun-birds. Its name? That’s easy. Knowledgeable gardeners among you will be saying: allamanda – either the large and spectacular cathartica or the smaller, more common and hardier schotti – the one often used as a border plant to decorate roadsides.

Actually it is neither, though it does belong to the same genus of apocynaceae; all plants which contain a milky and poisonous latex in their stems.

This particular plant hails from Mexico and Central America and, to the best of my knowledge, is rarely grown in Southeast Asia.

Certainly, this is the only example I have encountered either in Thailand or the Philippines. A pity, since it is not only a vigorous climber, but possesses clinging tendrils, which mean that unlike the heavyweight allamanda cathartica, it needs no support and will be happy in a large container.

Your correspondent would love to hear from anyone who is cultivating this vine. Its name? Probably odontadenia.

There is another aspect to this floral puzzle. According to the ‘bible’ of the country’s flora, ‘Plant Materials in Thailand’ – an illustrated catalogue which comes close to listing all species grown in the kingdom, there is another related climber called pentalinon luteum.

Like the odontadenia, it comes from central America and has similar, five-petalled, trumpet-shaped blooms in an even brighter neon-yellow.

Both have a pronounced pinwheel shape, with slightly overlapping petals that in form, if not in hue, resemble the flowers of the periwinkle. And since this vine is such a vivid yellow (luteum means ‘yellow’ in Latin), I am inclined to think this may be the variety in question.

There are lots of related and more accessible species. For example, a deep rose-pink variety of the allamanda is the mandevilla blanchetii, named after a British botanist.

Like cathartica, the mandevilla blanchetii is not self-supporting. It will need stakes to help it maintain its shape, but it can be trained against a wall or trellis. The leaves, which are grey-green, are relatively sparse and prone to attacks from mealy bugs.

But there are many more hybrids, mostly developed from three species: amabilis, splendens and sanderi. The colors now range from pale pink and purple to white and even red. Sanderi, a Brazilian native, is much more vigorous than the violet form blanchetii; a vine planted in my garden quickly grew eight feet tall and covered the sala. With deep green foliage and a yellow center to each bloom, it is a dramatic addition to any garden.

All these climbers enjoy a measure of sun. Most will grow happily on a patio or terrace, provided the conditions are right. If you plan to use a container, then use a large one. The roots will need a mix of sand (to help drainage) and plenty of organic material. Since they are heavy feeders, apply some slow-release fertilizer to the soil three or four times a year.

Oh, and don’t worry too much about the names.

If you have gardening or environmental concerns, contact Patrick at drpaccampbell @gmail.com. Many of his creative and academic publications can be found at his website: Green galoshes WordPress.

On Deck: Sailing ignored as a mainstream sport

Blazing Saddles: The bias against e-bikes