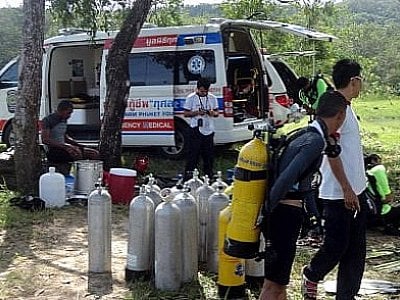 PHUKET: A new generation of rescue workers and Phuket Marine Police received necessary training in marine search and rescue as part of their adaptation to the growing number of water related deaths on the island, said the Kusoldharm Rescue Foundation President.

Kusoldharm Rescue Foundation workers, who are more normally associated with the grisly business of saving lives on the roads, spent from November 1 – 10 learning techniques to save others, as well as themselves, in marine emergencies.

“There are a lot of Thai and foreign tourists in Phuket who take part in water activities. As a result there has been an increase in the number of drownings and other water related incidents. We need to be ready to deal with whatever happens on land or sea,” said Kusoldharm Rescue Foundation President Benjawan Tamphanuwat.

“We have had this type of training for our staff before, but many of those who participated have now retired. So it is time to train a new generation of Kusoldharm rescue workers.

Although Kusoldharm rescue workers have not needed to respond to many water incidents, it is important that they have a working knowledge of marine search and rescue, she said.

“After all, we do live on an island,” she added.