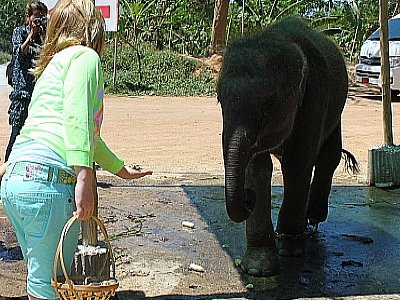 PHUKET: After months of silence, the DNA results needed to determine the legality of three baby elephants seized in raids on Phuket in February have been released for two of the three young pachyderms, while one’s fate is still undetermined.

The DNA results for the baby elephant seized from the Phu Thai Souvenir Market in Chalong proved that it was the offspring of a legally registered mother at a camp in Saiyoke Elephant Park in Kanchanaburi, Col Watcharin Phusit, Superintendent of the Regional Natural Resources and Environment Crime Suppression Division [NREC] confirmed to the Phuket Gazette today.

“The young elephant will be returned to the Phu Thai owners,” he added.

However, the DNA test results from the baby elephant seized from the ATV@Hill Adventure Tour camp, on the road to the Big Buddha image in Chalong, showed otherwise.

“The baby will not be sent back to the ATV camp, but reunited with its mother instead,” he said.

Col Watcharin also warned that his office would be taking steps to charge the camp operators under the Wildlife Preservation and Protection Act. If found guilty, the operator faces up to four years in jail, a 40,000-baht fine or both.

Meanwhile, the status of the young elephant “Joey”, seized from the elephant camp located at the Laguna complex in Cherng Talay, is still under investigation, explained Col Watcharin.

“The elephant camp owners have provided the NREC with a document signed by the Tah Thum district chief in Surin province, stating that the baby elephant is the offspring of a legally registered mother.

“We are still waiting on that district chief to confirm that the document presented to us is genuine,” he added.

While the investigation into the legality of that baby elephant continues, Col Watcharin warned, “We will be returning to Phuket to conduct more baby elephant raids in the future.”

New generation of rescue workers train up for marine incidents