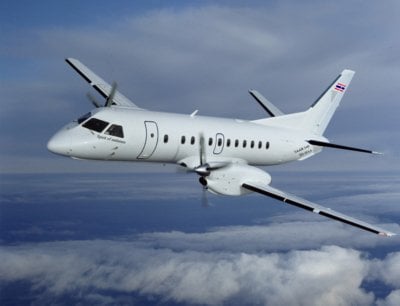 PHUKET: A new Phuket-based airline has announced the launch of daily flights between Phuket and Haad Yai along with a new weekend Phuket-Langkawi route.

The newly-launched Happy Air will begin operating flights from Phuket next month with its 34-seat Saab 340A aircraft.

The daily 40-minute Phuket-Haad Yai flights are currently scheduled to depart from Phuket at 9:30am and arrive in Haad Yai at 10:30am. The return journey from Haad Yai is scheduled to depart at 11am. Tickets on this route are priced at 2,500 baht (one way) and 5,000 baht for a round trip.

The 50-minute flights between Phuket and Langkawi are currently scheduled to depart from Phuket at 1pm on Fridays, Saturdays and Sundays and to depart from Langkawi at 3pm. Ticket prices for this route are 4,500 baht (single) and 9,000 baht round trip.

However, the airline said the flight schedules may change slightly before operations begin in October.

The Phuket-Langkawi flight is expected to be a boon for Phuket’s foreign residents as they will now be able to do a visa run and get back to Phuket within a few hours, with no need to incur hotel expense.

Happy Air’s flights will offer complimentary champagne and on-board meals, including ‘gourmet sandwiches’, fresh fruit juices, tea and coffee, and, on the Langkawi runs, the Phuket Gazette newspaper as part of the airline’s ‘premium’ service.

The Swedish-made aircraft are powered by Saab-GECT7-5A2 turbo-prop engines and can carry up to 34 passengers with 20kg of luggage each. The planes have a cruising speed of 484km/h (260 knots) and are capable of a maximum speed of 515km/h (278 knots).

Bookings can be made at the Happy Air offices on the Airport Road in Sakoo, Thalang. More information is available at www.happyairway.com. Email: info@happyairway.com; telephone: 081-978 3457.

Phuket Airport to get Asean upgrade