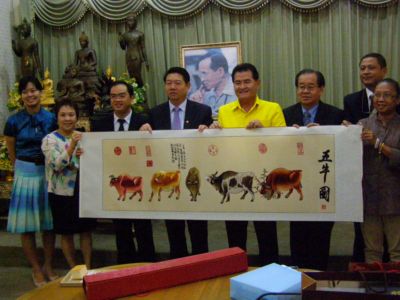 PHUKET CITY: Representatives from three landlocked Chinese provinces were in Phuket this week to examine the island’s appeal as a tourist destination for their sand- and sea-deprived residents.

The delegates from Yunnan, Hunan and Guizhou provinces, which have a combined population of over 150 million, held talks with Phuket Governor Wichai Phraisa-ngop and other officials at Provincial Hall yesterday.

The six Chinese representatives – here at the invitation of Suraphan Bunyamanop, consul general at the Thai consulate in Kunming – were all heads of Development and Reform Commission or Foreign Affairs offices in the three provinces.

They told the governor they were very impressed by the beauty of Phuket’s coastline and agreed to promote the island as a tourist destination.

They also said they would push for more charter flights between China and Phuket.

The delegates also suggested the Tourism Authority of Thailand open an office in Kunming, the capital city of Yunnan province.

They said Phuket could do three things to encourage more Chinese tourists to visit: ensure they weren’t cheated in any way; write road and place names in Chinese characters; and increase the number of tourism employees who can speak Chinese.

Gov Wichai replied that increasing the number of tourism professionals able to speak the language was unlikely to pose a problem.

“Between 40-50 percent of Phuket’s people have Chinese blood and still maintain Chinese cultural traditions,” said Governor Wichai. “We also have universities, schools and language institutes which teach the Chinese language,” he added.

The relationship between Phuket and the three provinces could be cemented further by signing ‘Friendship City’ agreements – similar to city twinning but less formal – though such agreements would be negotiated by the Ministry of Interior, Gov Wichai said.

The idea of signing of a memorandum of understanding on tourism co-operation was also mooted.

Negotiations will continue when government and private sector tourism organizations from the South of Thailand and the three Chinese provinces meet again at the Andaman Travel Trade event, held in Phuket between November 26 and 29 this year.

The delegates this morning flew to Chiang Mai for more talks and will return to China on Sunday.