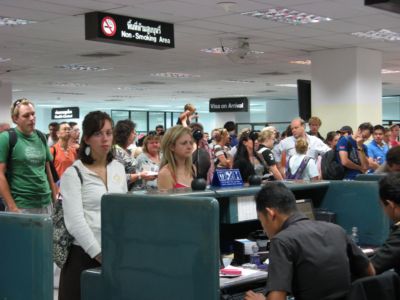 MAI KHAO, PHUKET: Phuket may have lost out to Hua Hin in the race to host October’s Asean Summit, but a 30-million-baht upgrade of Phuket Airport planned to help cope with the meetings will go ahead anyway, the Gazette has learned.

The improvements, which include increasing the number of channels through Immigration, adding X-ray machines and expanding the car park, should ensure a much quicker journey through the airport for tourists.

“After the expansion, we’ll be able to get every passenger out of the airport within half an hour of landing,” Ditsapol Padungkul of the airport’s development team said.

It is hoped the improvements can be in place before high season begins in November.

Airports of Thailand (AOT) had planned to withdraw the 30 million baht budget after the Asean Summit went to Hua Hin/Cha-am, but Senator Thanyarat ‘Gee’ Achariyachai, chair of the Senate’s Tourism Committee, argued that the money should stay in Phuket.

Ditsapol Padungkul, from the airport’s development team, said the airport was going to buy four new X-ray machines in addition to the six already in place.

“The car park is also going to be expanded because it’s not big enough right now,” he said.

The number of Immigration channels in and out of the country will be dramatically increased.

There are currently a total of 20 Immigration channels – 10 in and 10 out – but this will be increased to a total of 44 channels by high season.

Additional Immigration staff will need to be drafted in to manage the extra channels.

Senator Thanyarat said the budget was not large enough to provide accommodation for the extra personnel, but, if necessary, she would pay for it out of her own pocket.

“We will also have to find a way to get new Immigration computers for them – they cost 400,000 baht each,” she said.

Mr Ditsapol said the improvements would be formalized in the airport’s development plan next week.