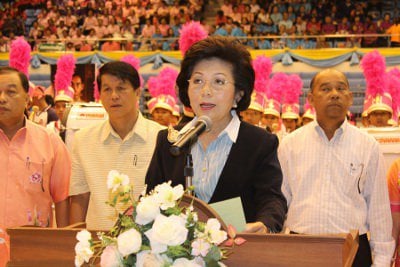 PHUKET: Sports fans and spectators packed the 4,000-seat Indoor Sports Complex at Saphan Hin to the rafters on Saturday for the new venue’s official opening ceremony.

Built on 207 rai at a cost of about 153 million baht, the center was first used for the 28th National Youth Games, dubbed the “Phuket Games”, held on the island earlier this year.

Among the guests at the event on Saturday were Phuket MPs Anchalee Vanich Thepabutr and Raywat Areerob, along with Phuket City Mayor Somjai Suwansupana.

However, Mayor Somjai added that the new complex will not be restricted to hosting national and international events. “It can also be used by local sports associations, which makes it a great facility for developing sports within our own community,” she said.

Mayor Somaji explained that the pre-existing “gymnasium” has a capacity of only 500 seats, but will remain in use for smaller local events.

The new center was built by Phraram 2 Civil Engineering Co Ltd over 720 days at a cost 152,999,000 baht, she added. Other major Phuket developments built by Phraram 2 include the Phuket Incinerator plant, the Supalai Condo in Phuket Town and the original Simon Cabaret entertainment complex in Patong.

Ms Anchalee pointed out that having such a venue would help boost Phuket’s prominence in sports tourism.

“Without having a venue of this quality, we could not request for large sporting events to be held here. Now we can,” she said.

After a variety of entertaining activities, including marching bands, dance performances by students and “wacky games”, including a “3G [three generations of ages] human centipede race”, the venue was put to its first sporting use post-opening ceremony: the final rounds of the first-ever “Democrat Cup” Phuket-only futsal tournament.

For a full report about the Democrat Cup playoffs, semi-finals and final, grab a copy of the Phuket Gazette this weekend.

Central Festival Phuket set to expand to east, not south