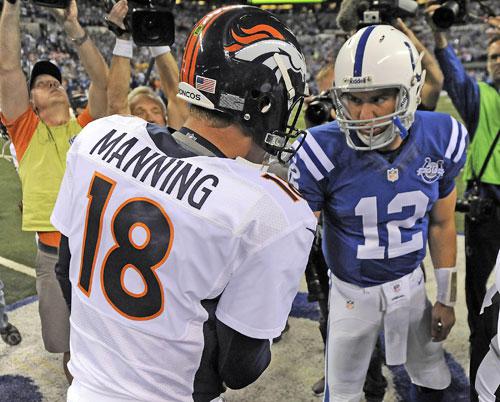 PHUKET: In week seven’s marquee match up, Bronco’s quarterback Peyton Manning’s return to Indianapolis to take on his former team did not turn out as many predicted, with rising star quarterback Andrew Luck outshining the veteran to carry his Colts to an exciting 39-33 win.

Manning and the Broncos entered the game undefeated and were favored by five points over the Colts, who went into the match 4-2 with wins against two top-ranked NFC West sides, the Seattle Seahawks and the San Francisco 49ers.

The game started with touching tribute ceremony to Manning, who during the “Manning Era” from 1998 to 2010 led the Colts to win in Super Bowl XLI and made them one of the most dominant teams in the AFC.

His importance to the Colts was highlighted even further after he had to sit out the entire 2011 season for a series of surgeries on his neck that many thought would be career threatening, especially given his age. Without him the Colts fell apart, going just 2-12.

The disastrous season came with a golden lining however: the right to the overall first choice in the next draft. With Heisman Trophy winning QB Andrew Luck of Stanford, the Colts management selected the rookie and, in a highly-controversial decision, released Manning.

Last Sunday’s exiting game may have shown other NFL teams the path to success against the Broncos: put pressure on Manning at all costs, before he tears you to pieces with passes to a much-improved receiving corps that includes league leading receiver Wes Welker, the former New England Patriot who signed as a free agent this year.

A key play in the game came in the second quarter, when the Colts defensive line got to Manning and forced a fumble deep in Bronco territory. After that, Luck and company scored three unanswered touchdowns and the final result was never really close after that.

As sweet as the win must have been for the classy Indianapolis management, it also came at a frightful cost. Star veteran receiver Reggie Wayne left the game in the fourth quarter after his knee twisted on a pass play. Early in the week it was confirmed he had suffered what everyone feared most: a season ending tear of his anterior cruciate ligament. He will miss the remainder of the season.

Denver falling from the ranks of the undefeated left only the surprising Kansas City Chiefs (7-0) able to claim that distinction. They will host the Cleveland Browns (3-4) at Arrowhead Stadium in Week 8. In another interesting game, the Jacksonville Jaguars will go “across the pond” to host the highly favored San Francisco 49ers at Wembley Stadium in London. Jacksonville fans might not be too disappointed to get a break from the Jags, who remain winless and have shown little or no reason for optimism on either side of the ball so far this season.

There are several good podcasts that closely analyze all the games and make predictions. Just one of these is the “Ross Tucker Football Podcast”.

Ross, a Princeton graduate who played seven years in the NFL, provides some excellent insights and has enough enthusiasm to keep Phuket NFL fans like this one sufficiently excited to wake up in the middle of the night to watch all the action live. He does several each week, all of which can be found at: sportsusamedia.com/ross-tucker.

Phuket’s Road to Freedom under fire for corruption