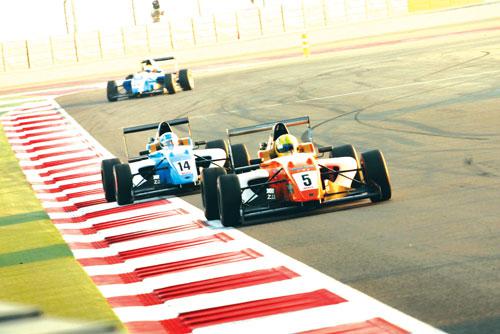 PHUKET: Island-based Australian racing driver Dylan Young announced that he has signed a deal to compete in a second season of the 2013 MRF Challenge Formula 2000 Championship, with gracious support from Wahoo Phuket, Kata Rocks and Indigo Pearl.

The series will commence this weekend with the first two races being held alongside the Airtel Indian Formula 1 Grand Prix in New Delhi today until Sunday.

The 2013 MRF Challenge Formula 2000 Championship will feature 14 races in total over four rounds. The cars are based around a formula 3 chassis from Dallara in Italy and powered by 210 brake horsepower Renault engines that allow the drivers to race at speeds up to 260km/h.

Positioned just two levels below formula 1, the MRF Challenge series will be broadcast via ESPN Star Sports to around 35 million viewers across Asia and the highlight will be the opening races this weekend, where Young explains it will be important to impress in front of the watchful eyes of the formula 1 team bosses.

“It will be a tough weekend considering I haven’t been in a race car since December last year, but I have to make the most of the opportunity when racing at a formula 1 event,” Young said.

“I’ll be up against some seriously strong competition with the other drivers that have been racing in Europe all year but there’s no better test than that. Realistically I don’t think anyone is expecting miracles straight up this weekend but I’m absolutely pumped to get back out there and represent Phuket on the pathway to formula 1 and from there heading into round 2 I’m sure we can really begin to take the fight towards the front.”

Young has secured sponsorship support for a second season from Indigo Pearl Resort Phuket who backed his campaign in 2012, along with a key personal benefactor who is supporting Dylan’s career progression. The rest of the island is taking notice too, as Dylan has recently signed two new sponsors for the opening races with Wahoo Phuket and Kata Rocks coming onboard.

Richard Pope, CEO of Kata Rocks commented on the partnership:

“We are delighted to be able to continue to support his racing. The sport of motor-racing it is a tough game, and it is a very positive reflection on Dylan’s tenacity and winning-drive that he is working every channel to develop his talent and brave the odds. Kata Rocks is pleased to be able to support Dylan in India and we look forward to championing more events that will continue to bring one of Phuket’s leading sportsmen into the international limelight.”

At this stage Young is only confirmed for the opening round at the F1 Grand Prix in India and stressed that he needs to find continued support to ensure he will be on the grid when the series heads to the Bahrain F1 Circuit in support of the FIA World Endurance Championship event from November 28-30.

“Finding the required budgets has, and always will be, difficult in motorsport – so that’s why I want to thank Wahoo Phuket, Kata Rocks and Indigo Pearl for their support at the opening round along with someone who is believing in me behind the scenes.

“They know who they are. We are aiming for international recognition for myself as a driver as we continue to get closer to formula 1 but also importantly to generate awareness for Phuket on the international sporting stage.

“Therefore I’m hoping we can continue to find the necessary support to ensure I keep carrying the Phuket name further towards the top level. That is a paramount goal that Wahoo Phuket, Kata Rocks, Indigo Pearl and myself are willing to work together on as I head towards formula 1,” said Dylan Young.

Counting down to Laguna Phuket Tri-Fest