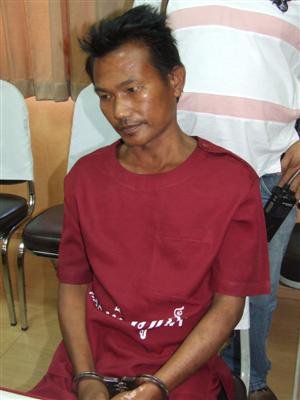 PHUKET, KOH KAEW: An employee of Bangkok Hospital Phuket was hacked and bludgeoned to death behind the deserted Phuket Country Lodge hotel on January 25.

Police didn’t need to look far for a suspect – noodle shop employee Winai Kullata, 43, was found asleep, spattered with blood, next to the body of the victim, 33-year-old Somchai Suren.

Police believe Mr Somchai was killed with hammers and axes at around 9:30 pm on January 25 by Mr Winai and two other men following a drinking session at a quiet spot near a duck farm located in a remote area behind the Phuket Country Lodge, near the intersection of the bypass road and Thepkrasattri Rd.

The two suspects who managed to stay awake and make their escape were named by police as Satian Soparb and a man identified only as “Ung”, surname unknown. Both suspects remain at large.

Mr Winai was immediately considered a suspect because he was found fast asleep at the grizzly scene when the police arrived at 11:30 pm.

Both his pants and black Nokia mobile phone were spattered with blood, police said.

Mr Winai was taken to his house in Koh Kaew Village 3, where a search by police recovered two rifles.

Mr Winai, who claims that Mr Satian and Ung were responsible for the killing, has denied any involvement in Mr Somchai’s death.

The Year of the Ox is here