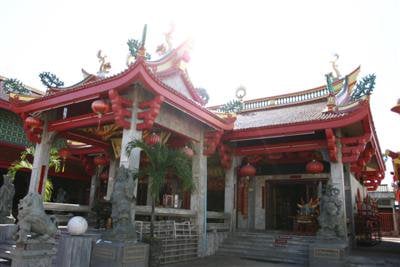 PHUKET CITY: Yesterday marked the first day of the first month in the Chinese lunar calender, the beginning of the Year of the Ox.

Chinese New Year is celebrated with gusto by Phuket’s ethnic Chinese community and by the many Chinese tourists who travel here during the holiday.

Legend has it that Chinese New Year began with a fight against a mythical beast called the Nian (year) who would eat livestock, crops and even the villagers themselves. In a bid to sate the Nian’s hunger, villagers would place food outside their doors at the beginning of each year, hoping that if it ate the food it wouldn’t eat them.

One time villagers noticed the Nian was scared away by a small child dressed in red. From then on, residents hung red lanterns outside their doors for protection. The Nian never returned to the village and from that point onwards red became a lucky color in China.

The new year period extends for fifteen days, during which a number of traditions are observed by the Chinese in homage to their ancestors. In the days leading up to the holiday, Chinese families give their homes a thorough cleaning, symbolic of washing away the bad luck from the past year and preparing for good luck in the new.

Other traditions include the preparation of traditional foods, visiting senior members of the family as a sign of respect and married couples or elderly relatives presenting money in red envelopes called ang pao to younger family members.

The Ox, the second sign of the Chinese zodiac, symbolizes good fortune achieved through hard work and determination. It is a powerful sign and those born under its influence are considered born leaders, highly dependable with the ability to achieve great things – but also stubborn and individualistic.

2009 is also an “earth year” which has a tumultuous relationship with Ox’s element of water, yet this is not a negative combination by any means. The main characteristic of the combination is durability, suggesting a pragmatic environment for the year ahead.

Given the state of the global economy, this may be what is required in 2009.

Another boatload of Rohingyas arrives in Thailand