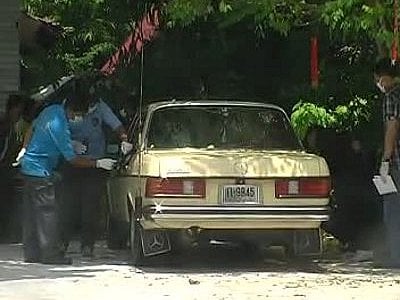 PHUKET: Police are investigating whether winning the lottery is behind the death of an affluent and well-known monk whose half-robed corpse was found in the back seat of his Mercedes-Benz on Saturday.

Rumors are circulating through the Thai media that the 62-year-old Buddhist monk, named in reports only as “Chom”, recently won the lottery, stirring among followers suspicions of foul play.

Officers responding to a report arrived at the scene, a locked vehicle parked in front of empty monks’ quarters at Wat Putthikaram in Haad Yai, to discover Chom’s body in a state of decomposition.

Chom’s body – topless, clad only in lower robes – was found lying face up in the back seat.

A cover was spread over the car, which may explain why the body was not discovered earlier.

In the car, police found 2,060 baht and 20 Malaysian ringgit in cash, along with several amulets.

Initial examination by police found no wounds or signs of struggle, and officers have yet to determine the cause of death.

They said they saw the late monk lift the car cover and enter the vehicle, presumably to take a nap, as he was known to often do.

However, they called police after noticing the foul stench emanating from the car and then finding the body inside.

The monks believe Chom died of asphyxiation because he suffered from acute asthma, police said.

However, Chom’s relatives and followers have voiced doubts that this underlying condition caused his death.

His family told police that he had not been in contact since May 10.

After news of Chom’s death became public, rumors quickly began to circulate that the well-known monk – who had a considerable following in both Thailand and Malaysia – had recently won the equivalent of 5 million baht in a Malaysian lottery.

“We are now waiting for the autopsy report from Prince of Songkla University to settle whether the monk was murdered or died from his [asthma] condition,” said Lt Col Ekkarat Suansan of Haad Yai Police.

The police have yet to confirm whether or not Chom had won any money in a lottery just before his death, Col Ekkarat said.

“[So far] It is all just rumors that he won the lottery,” he said.

Phuket hospital set to open its doors after 11-year wait