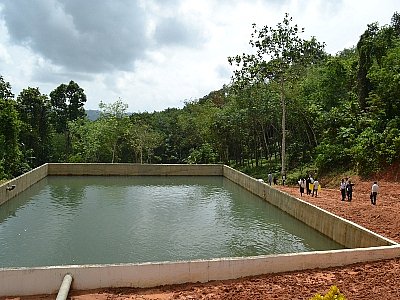 PHUKET: A small project created by villagers in Thalang to help them cope with chronic water shortages has landed them in a national competition for the most innovative water resource project in the country.

The project will be up against similar projects from every province in the South in the regional competition, the winners of which will be considered for the national title.

“We saw that residents in the village had done a great job of managing water in their community. So we want to enter this project in the regional competition against projects in 13 other provinces in the South,” said Sombat Puangsombat, director of the Irrigation Project Phuket Office under the Royal Irrigation Department.

The project gained momentum in late 2007 after Sopol Rayasakul, who lives in the village, petitioned HM King Bhumibhol Adulyadej to endorse the project.

At the time, residents in the village did not have enough water for daily use in their homes, or to use on their farms in the dry season, Mr Sopol said.

In 2008, he received a letter from the Office of His Majesty’s Principal Private Secretary stating that His Majesty had accepted to endorse the Klong Phra Teaw Dam Improvement and Waterworks System Project as a Royal Project.

A year later, the Irrigation Project Phuket Office started construction and both reservoirs were ready for use by October last year.

“Since the project was completed, our lives have become much better. We have now planted papaya trees and on 24 rai of land we have started a rubber tree plantation,” said Mr Sopol.

“The main reservoir can also be a place for residents to relax as well as a venue for holding Loy Krathong events,” he added.

The nationwide competition, officially called the Small-Scale Water Resources Project Management Competition, is being organized by the Office of Royal Development Projects Board and the Irrigation Department to celebrate HM The King’s upcoming 84th birthday.

Each winner in the regional rounds of the contest will receive 50,000 baht cash and a trophy dedicated from the prime minister.

Second place will receive 30,000 baht cash and a plate from the Office of the Royal Development Projects Board.

Consolation prizes of 10,000 baht cash each and plates from the Office of Royal Development Projects Board will go to 20 participants.

The competition results will be announced on August 31.

There are over 2,000 water-resource Royal Development Projects across the country.