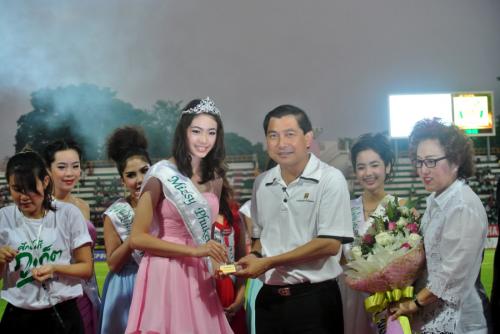 PHUKET: Most of the nearly 1,800 fans who attended Phuket FC’s final home match of the season had little to cheer about after their side was downed 1-0 by last-placed Rayong United in a disappointing match on Saturday night in Phuket Town.

Indeed, the halftime presentation of “Mizsy Phuket” finalists proved to be the evening’s highlight for the home fans, with 17-year-old Nong Chompoo crowned by Phuket Governor Maitree Inthusut as the official club ambassador for next season.

While eyes were opened wide and jaws dropped during half time – fixated on the glamor and beauty that had stole Surakul Stadium’s spotlight – the tense sentiment on match-play was a different story.

Playing the penultimate match of the 34-scheduled fixtures for the Yamaha League One (YL1) 2013 season, neither side had anything to gain beyond pride – Phuket’s place in the YL1 was not under threat while Rayong have already been guaranteed relegation back to the Division 2 regional leagues next season.

Nonetheless, Phuket fans were hoping for – expecting – a goal fest, but were only to be disappointed, as attack after attack by a hungry Phuket offensive unit led by Kengne Ludovick (Takam), Cristian Alex and Eakartit Somjit sustained heavy pressure on Rayong’s backs, but to no avail.

As usual, it was French playmaker Geoffrey Doumeng creating many chances in the midfield, feeding the ball to strikers on the wings and in the area, but Rayong proved to be having a rare “on-day”, which was finally cemented midway through the second half by South Korean, Kwon Dae Hee.

Some would argue that Rayong’s advantage was in fielding a number of former veteren Phuket players – including Sutee Sakdiwong, Kittithach Kraithong and Marcio Santos – who aparently had more to prove.

“I truly do miss all my friends in Phuket and playing at Surakul Stadium, but this is football – nothing personal,” Santos told the Gazette after the match.

Phuket fell into 11th place ahead of their final match, this Saturday, November 2 away to 5th place Nakhon Ratchasima. Kickoff for that match at Chalerm 80 Pansa Stadium, will be at 6pm

Following are all YL1 results from Saturday:

In the final matches next Saturday, the second and final relegation spot will be decided, with Rayong FC, Si Racha, TTM and Khon Kaen all at risk.

Meanwhile, the second and third promotion spots will also be finalized on Saturday; out of PTT Rayong, Singtharua and Bangkok FC, only two will be promoted along with Airforce AVA FC.

All final matches to be played on Saturday’s grand finale are as follows: