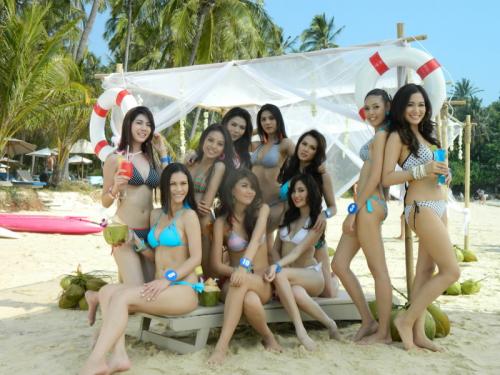 PHUKET: The 20 Miss Thailand World contestants on a publicity tour in Phuket wowed onlookers yesterday morning when they took part in a swimsuit photo shoot on the beach in front of the Cape Panwa Hotel, where they stayed.

Among the 20 beauties is one Phuket native: Nathasinee Wichaidit, 20, from Koh Kaew.

The group departed Phuket yesterday afternoon, and will travel to Myanmar on March 25 to promote Thai culture by joining a fashion show themed “Beauty still has value… Beauty to the sight of Asean”.

The contestants will return to Bangkok for the final round of the Miss Thailand World pageant to be held at the Bangkok Convention Center at the Centara Grand hotel on April 9.

The pageant finale will be broadcast nationwide on Thai TV Channel 3 on April 10, starting at 10:30pm.