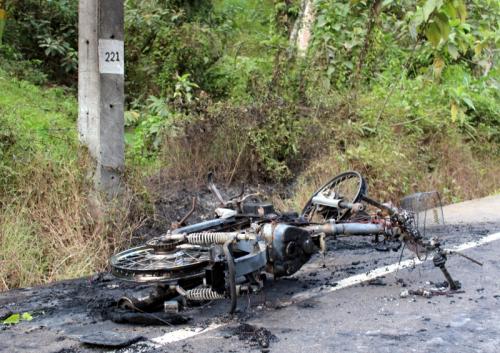 PHUKET: A series of suspected arson attacks on motorbikes in Phuket over the last two days has police scrambling to identify the culprit(s).

“We suspect the bikes were set on fire by a single gang of teenagers out to cause trouble,” Phuket’s top cop, Provincial Police Commander Choti Chavalviwat, told the Phuket Gazette.

“I have already assigned a joint police force from Kamala, Kathu and Cherng Talay police stations to investigate the cases,” Gen Choti said.

The first incident occurred in the parking area at the popular Laem Singh Beach on March 12, in which four bikes were found blazing at around 4pm (story here).

Later that evening another bike was found burning on the side of Pha Hin Tang Road.

The most recent motorbike to suffer burning rubber was discovered on March 13 at 3pm along the Kathu-Koh Kaew Road, not far from the Phuket Mining Museum.

About 200 meters from that motorbike, Lt Sawas Pholon of the Tung Tong Police and his team discovered a five-liter container of petrol hidden in the grass. Also not far away, police found a helmet.

“All the evidence was gathered to check for finger prints,” Lt Sawas said.

Locals told police that the motorbike was owned by a gardener in the area who parked his bike there daily.