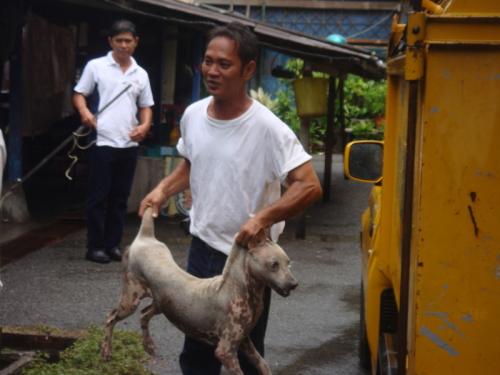 PHUKET: The current Phuket Gazette online poll asking whether or not stray dogs should be rounded up and taken off Phuket’s streets has stirred the island’s dog-loving community into a frenzy.

The poll followed Phuket Provincial Livestock Office chief Weerasit Puthipairoj, 58, calling for all stray dogs to be humanely collected off the streets and taken to the Livestock Office’s dog shelter in Thailand (story here).

Today, John Dalley of the well-known Soi Dog Foundation issued a missive, calling for Phuket dog-lovers to vote in the poll and to cast their votes in favor of sterilization.

“The poll contains no options for the ONLY scientifically proven (and humane) method of stray animal population control in SE Asia, this being sterilization. The closest option to an informed and intelligent answer is the fourth one (“No, there’s no need to collect them, they’re not a big problem in Phuket.”) and I encourage you to take a moment and vote for this option (fourth option),” Mr Dalley said.

“Please make your opinion known NOW by taking the poll and voting for the fourth option,” he wrote.

“Rounding up dogs and placing them in dog pounds has no effect whatsoever on the overall population, as the unsterilized remainder will always rapidly breed to fill the void. It has been scientifically proven that spaying and neutering 75% to 80% of a population of a species will see a reduction in numbers,” Mr Dalley explained.

Mr Dalley, renowned and internationally recognized for his animal welfare work, went on to explain that “option 1”, to have the dogs rounded up and taken off the streets, is not as humane as some readers might think, for several reasons, including:

“1) The government pound by its own admission does not have the financial resources to care of the dogs currently there. The animals are not sterilized, not vaccinated, nor do they receive medical treatment. In fact Soi Dog has in the past had to give the pound food simply to feed the dogs! If all the dogs in Phuket were taken to the pound, they would be stacked 5 deep!

Mr Dalley added, “The best option, which is notably missing from the poll, would be to conduct an island-wide sterilization program as Soi Dog is currently doing with the support and full cooperation of the local governments on Phuket. This program sees 10,000 dog sterilized each year.”

“Please take a moment to vote in the poll and make YOUR voice heard!” he urged.

“Vote for the poll’s fourth option by clicking here ––> https://thethaiger.com/poll/”target=”” he added.