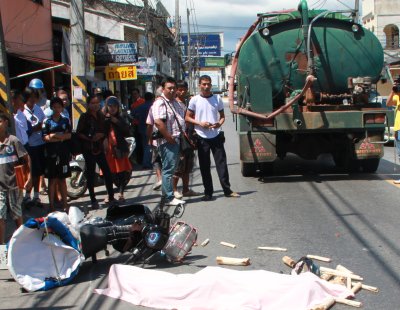 PHUKET: A man wearing a safety helmet was crushed beneath a 10-wheel water-bowser truck, causing heavy traffic congestion for about an hour on Kra Road in Phuket Town this morning.

The unidentified man, thought by Phuket Town Police to be in his forties, was transporting roasted-rice-bamboos on the rear of his motorbike at the time of the accident.

The driver of the water bowser, Phanlop Tuengjaroen, 39, explained to Phuket City Police Duty Officer Nanon Pitakkultorn that he was driving to King Rama IX Park to refill when he felt the rear wheels go over something on the road.

“When I got out of the truck to take a look, I could see a body behind my vehicle,” Mr Phanlop said.

“I was driving slowly and I didn’t see a motorbike. I think he must have been trying to pass me on the inside and fell into the path of truck,” he said.

Mr Phanlop said he was willing to go to the Phuket City Police Station for further questioning.

The body of the unidentified man was taken to Vachira Phuket Hospital mortuary.