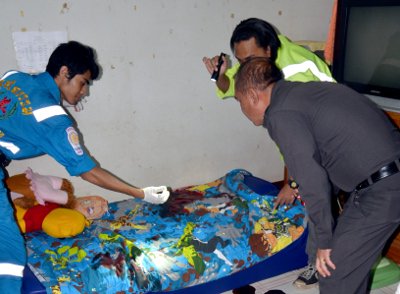 PHUKET: Police are investigating the death of a man shot point blank in the head with a homemade gun while watching television in his home on the outskirts of Phuket Town last night.

The investigation, headed by Phuket City Police Superintendent Sermphan Sirikong, continues despite the widow’s claims that it was suicide.

Col Sermphan arrived at the family home in Rassada at 11:30pm after receiving a report from local residents of hearing a shot fired in the neighborhood.

In the living room, police found the body of Montien Ngernmak, a 44-year-old machinist who specialized in making amulets, often worn by Thais as a form of protection against evil spirits.

Mr Montien had suffered a single gunshot wound to the forehead, and a .38-caliber homemade handgun was still in his hand.

“We searched the living room and found no signs of a struggle. A single .38 bullet case was found on the bed. On the wall above the bed we found one bullet hole,” Col Sermphan said.

Mr Montien’s wife, Somjit Sae-Ui, 46, was in the same room, crying and cradling her 11-year-old son, when police entered the home.

“The body has been taken to Vachira Phuket Hospital for examination to determine whether there is any gunpowder residue on Mr Montien’s right hand. The gun will also be examined,” Col Sermphan said.

Mrs Somjit told reporters that Mr Montien was watching television in the living room while she and the boy were in the bedroom.

“Then I heard the sound of a gun going off. I ran to see what happened and I saw my husband lying in his own blood with a gun in his right hand,” she said.

“I have no idea why he killed himself. He never told me about anything that caused him to be heavy-hearted.

“We never had a fight. The only thing he was always muttering to me about was that he had a bad headache, a migraine,” she said.

“I don’t know how he got the gun. I didn’t even know he owned one,” Ms Somjit added.

“At this stage police have yet to believe Mr Montien’s death was suicide. We will continue our investigation,” he said.