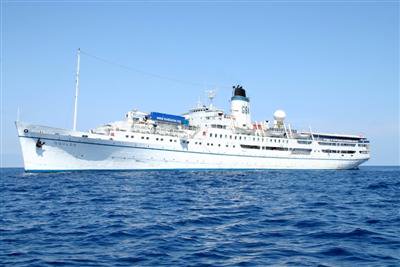 PHUKET CITY: On the next leg of its mission to bring books to readers around the globe, the world’s oldest passenger liner will make its fifth port-of-call in Phuket later this month.

The MV Doulos, built in the US in 1914, will berth at the Phuket Deep Sea Port for a one-week stay starting on November 19.

Built just two years after the Titanic, the vessel, now named MV Doulos, is currently owned by the German charity Good Books for All, or GBA.

The 131-meter ship was rechristened in 1977 and was given the name Doulos, which translates to ‘servant’.

It currently has a crew of 330 people from 50 countries.

Described as ‘the world’s largest floating book fair’, the boat is at any given time stocked with 4,000 to 6,000 titles, most in English.

Purchase prices for the books are said to be very reasonable.

Its stay in port in 2006 lasted four weeks as the crew worked to help victims of the 2004 tsunami disaster.

In addition to offering books, the crew will stage performances and activities for a wide audience, and have many international volunteers on board to converse with people wishing to practice their spoken English.

An opening ceremony will take place at 9:30 on the morning of November 19 and the ship will be open to the public from 2pm.

Tickets to board the massive ship cost just 10 baht.

After its arrival, the vessel will be open to the public at the following times:

Tuesday to Saturday: 10am to 9pm

Sunday and Monday: 2pm to 9pm