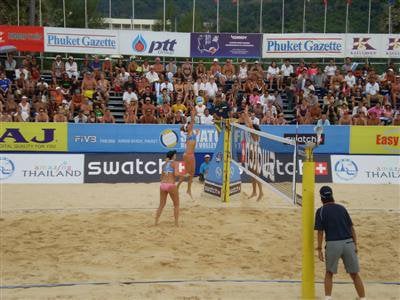 Heading the list of 70 teams competing in the US$190,000 event are April Ross and Jennifer Kessy-Boss, the 2009 Women’s Beach Volleyball World Champions.

The US pair, currently ranked third in the world, return to Phuket to defend the crown they won last year when they beat compatriots Branagh and Turner in three sets.

The event, which run untils Sunday, is the final stop on the Swatch FIVB Beach Volley World Tour 2009.

One of 18 tour events, it is the only one to take place in Southeast Asia.

Entry is free for spectators.

This year the line-up includes competitors from 30 countries including Germany, Brazil, the Netherlands, Greece, Australia, China, Mexico and Russia.

Three teams will represent Thailand in the main draw of the tournament and a further two teams will take part in qualifying rounds starting today.

The event was opened yesterday in a ceremony presided over by Vice Governor of Phuket Worapoj Ratthasima.

“Phuket welcomes everyone. Thank you to all of you who helped make this happen,” he said.

The event is sponsored by the Phuket Gazette.

To keep up with all the exciting action on-line, click here:

MV Doulos back in Phuket in mid-November