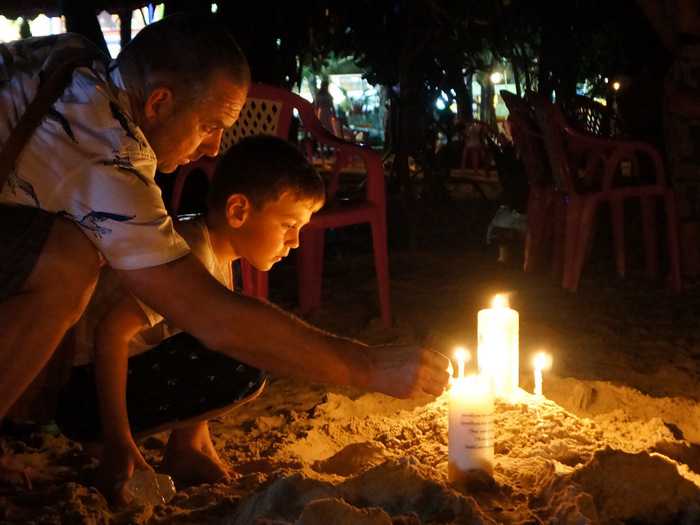 PHUKET: The devastating loss of hundreds of thousands of lives to the Indian Ocean Tsunami 10 years ago also brought a wave of humanity among the differing peoples of Phuket and the global community, Phuket Vice Governor Suthee Thongyam told those gathered at the Light Up Phuket memorial event on Patong Beach on Friday.

“It is a great honor to chair the Light Up Phuket event,” said Vice Governor Suthee. “We all realize that the waves took away things – peoples’ lives – that could never be replaced. We cannot even estimate the loss,” he said.

“However, in facing such a disaster, we discovered how much we cared for each other and that we would never leave each other to face such a dire situation alone.

“We were willing to help each other regardless of nationality, religion or language. It did not matter where we came from. This is the power of love and humanity… We faced the tragedy, but gained love and a way of healing the pain.”

V/Gov Suthee pointed out that much had been learned from the disaster.

“We now have a comprehensive, operational emergency-warning system. I urge everyone to enjoy their time here. We never know when a tsunami might come, but when it does come, any unusual [seismic] activity will be detected by our early-warning system,” he assured the gathered crowd.

“I would like to thank everyone for coming to this event to honor the victims and to ensure that they will never be forgotten.”

Memorial services in Phuket marking the 10th anniversary of the Boxing Day tsunami began at the Tsunami Memorial Wall in Mai Khao at 8:30am, with Buddhist monks conducting a mass prayer, followed by a Muslim service and then a Christian service (story here).

Phuket Governor Nisit Jansomwong was unable to attend services in Phuket on Friday as he had been called to join the memorial event at Khao Lak, attended by Prime Minister Gen Prayut Chan-ocha and a host of international envoys.

Joining the Light Up Phuket memorial service at Patong was Phuket Provincial Administration Organization (OrBorJor) President Paiboon Upatising and the international honorary consuls of Phuket, along with a turnout of hundreds of people.

The official death toll for Thailand from the disaster stands at more than 5,000, while the number of people still unaccounted for after the waves struck the Andaman coast remains at nearly 3,700.

Tsunami survivor Jeje Lerdsil, 25, joined her little daughter in lighting candles and placing them on the sand, as is the tradition at the Light Up Phuket event, in remembrance of that fateful day.

“I was at home with my mother that morning,” she said, with tears streaming down her face. “I was going to help my father open our beach restaurant at Kamala.

“My father called and told us that the sea looked weird, something he had never seen before. While we were on the phone, the line cut off. Suddenly people were running and shouting as big waves hit the beach.”

Fears that she had lost her father to the waves were laid to rest when he finally arrived at the family home some hours later.

“I was shocked. He said the waves washed him as far back as Phuket FantaSea, but luckily he managed to hold on to a coconut tree and survived,” Ms Jeje said.

“We were so happy that father was fine, but we lost everything: our restaurant, our rented house near the beach and our brand-new pickup truck.

“We now live in Phuket Town. We are scared of the waves and we do not want to live near the sea.”

Ms Jeje explained that she did not attend the Light Up Phuket memorial service the first year it was held, just one year after the tsunami.

“How could I? I couldn’t remove how bad it was from my mind. But I have attended the event every year since the second anniversary to honor those killed by the waves,” she said.

Swedish tourist Inghe Eric Ericsson, 60, was trapped on the first floor of a hotel near the Patong beachfront.

“People knocked on the door told me to leave the room, but I was on the first floor and stuck in my wheelchair,” he recalled.

“Water came flooding through the hotel, and people carried me upstairs to where we were safe. We had to stay there for two days without water or electricity.

“Now, I come back every year to join the memorial. Patong was a mess, but everything was okay by summer the following year.”

Somchao Khaitalay, 58, was working as a beach masseuse when the waves struck.

“When I saw the waves coming, I yelled out to an Australian woman, one of my customers on the beach, to run to high ground.

“I made it, but I never saw her again. I left Phuket five years ago, and, today, I came back for them.”