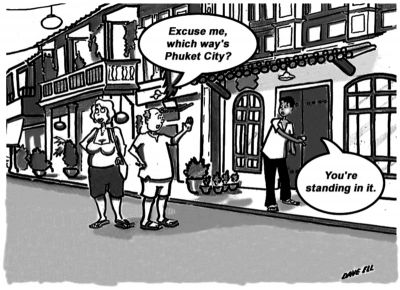 PHUKET: What’s the name of the administrative capital of this island of ours?

If you answered ‘Phuket City’, you are technically correct. The Thai government raised the status of the town to ‘thesaban nakhon’ – which can be translated as ‘city municipality’ – on February 13, 2004.

According to the government’s definition, a municipality needs a population of at least 50,000 and ‘sufficient income to carry out the tasks of a city’ to qualify. With a population counted as 75,573 in 2007, Phuket’s capital clearly makes the cut.

Nevertheless, if you answered ‘Phuket Town’, you’re among the majority of people who live here. English speakers, native or not, overwhelmingly refer to the capital this way.

And most of those people see no need to change. What they perceive, when they pass through the small conurbation of Phuket Town, is exactly that – a town.

The debate raises an interesting question: who has the right, if anyone, to define what language usage is correct, and what isn’t?

In linguistics, ‘prescriptivists’ are those who believe there exist individuals or organizations who have the right to rule on what constitutes ‘proper language’.

Language teachers – and indeed newspaper editors – are usually of the prescriptivist school, and understandably so.

Try teaching a student English with anything less than a certainty of what’s right and wrong, and you’ll get the picture.

‘Descriptivists’, on the other hand, seek to describe language as it is actually used in the real world, unmoved by the pronouncements of so-called ‘language mavens’. According to the descriptivists, ‘I’m lovin’ it’ – the McDonald’s slogan derided by many as ungrammatical – is correct.

If a Texan tells another, ‘I ain’t happy’, and the listener understands and hears nothing unusual or unclear in what he has heard, then in what sense can this be said to be ‘incorrect’?

A language is just a dialect with an army, as the aphorism has it.

Here in Phuket, some observers have seen fit to deride those who use the term ‘Phuket Town’ as ‘small town thinkers’, supposedly unable to grasp the 21st century problems that face the town and, indeed, the entire island.

Does substituting a grand term for a lesser one necessarily bring about an expansion in conceptual ability?

Phuket City might be the official title. But as long as the place looks like a town, feels like a town, and remains a town in both outlook and general parlance, you’ll still see the words ‘Phuket Town’ in the Phuket Gazette.

Meanwhile, tell us what you think. ‘Phuket Town’-ists and defenders of ‘Phuket City’ are invited to post a comment below. The most cogent may be selected for publication in this week’s hard-copy Gazette.

OPINION: Reports of My Death