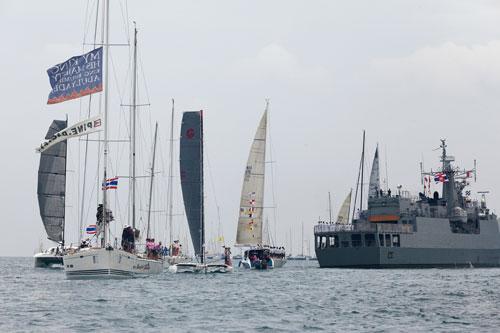 PHUKET: The fleet set sail following the Royal Thai Navy sail pass on day four of the Phuket King’s Cup Regatta in light rain; the first such weather pattern of this week of racing. The key element though was brisk wind which was constantly shifting direction making for a high work-rate day for all of the crew members (numbering almost 800 for this year’s Regatta).

Ray Roberts and OneSails Racing continued their storming run for IRC0 glory with another win in races 7 and 9 today. In the second race of the day, Neil Pryde’s Hifi team were victorious, whilst their rivals Team “Oi!” earned two second places. OneSails Racing leads the class with a small advantage over Hifi, who will face a stiff challenge tomorrow, but one that will make for an exciting conclusion to the Grand Prix class.

IRC1 class today was won yet again by Foxy Lady VI, with three solid victories on the penultimate day. The team have ruled the IRC1 this year and are on top by a wide margin with just a day’s racing to go.

Bill Bremner, Skipper of Foxy Lady VI, said, “Today’s challenges were unbelievable – so many wind shifts, a nice start in 13 knots, but we almost got pushed over jousting with rivals, but tacked well, then just did amazing work up to the first marker; we just carried that performance on to the finish. It was challenging because of pockets of breeze and a moving tidal current which kept moving, making the boat perform oddly – a lot to deal with. The second race was the hardest of the Regatta – super light, 60 degrees oscillations in the wind, very tricky. We found beautiful wind in the last race, and just ran it. I can’t believe we’ve done what we’ve done, this is our tenth Regatta, our fifth boat and we get so close each time. We would have to do really badly tomorrow for something to go wrong, touch wood!”

In IRC2, Yasuo Nanamori and “Karasu” took another two victories on a superb penultimate day, and are strong favourites to win the class now; only a shock upset can scupper their run to a trophy now. The final race on day four in this class was won by Fujin who still trail the Japanese in the hunt for IRC2 honours.

Ichi Ban came back strongly in IRC3 race six, challenging Anthony Root’s Red Kite II team who are their main rival in the class. Peter Dyer’s Madam Butterfly (Team Kata Rocks) won the second race of the day, with the final race of the day going to Red Kite II. The Royal Thai Navy team performed well and came in the runner-up spot today in the first race of the day, although they struggled to overturn slower winds in the latter races.

In Premier class, Pine-Pacific has dominated their class all week, and was first again today. Silandra V, their nearest rivals remain close behind in the standings.

A new winner emerged today in Sports Boats – Team Tornado, skippered by Lincoln Redding. The class-leading IPPAI could only manage third place today, although regrouped to win the second and third races of the day. IPPAI maintain the advantage going into the final day.

In the Sunsail Charter class, Rambutan skippered by Petr Kochnev was victorious in race three, ahead of Team Tamarind.

In the Bareboat Charter class, Team Venture were quickest again today. The team is sitting on top of the table with the gap between them and the competition becoming increasingly wide.

Hans Rahmann’s Voodoo team won race six in the Firefly 850 Sports class today, mounting a late challenge to the dominant John Newnham skippering “Twin Sharks.” The British team came back hard in race seven and eight, however, to claim the victory in both and still lead the rankings.

In Multihull Racing class, Asia Catamarans Hurricane came in with another three wins to maintain their top-of-class position, and look to have the class all wrapped up ahead of tomorrow’s final race day; they enjoy a wide points margin, ahead of tomorrow’s closing races.

Windsurfers competed today for the first time in this year’s King’s Cup. Thai competitor Navin Singsart was fastest on the day in all four races, with Thai rival Patharadanai Chinin following closely behind. Thai star Ek Boonsawad finished third. Siriporn Kaewduangngam and Sarocha Prumprai were joint quickest in the Women’s Open class. Thailand absolutely ruled the opening day of the windsurfing, with a large number of international competitors trailing in their wake.

Challenging and ever-changing wind conditions at today’s Regatta threw some slightly different weather into the mix, but the top competitors across many of the classes looked to press home and consolidate their point scores before the final day tomorrow. This year’s Regatta, the 27th Phuket King’s Cup, has delivered an exceptional fleet and high levels of professionalism and sportsmanship throughout.

Inaugurated in 1987 to celebrate the 60th birthday of His Majesty the King of Thailand, the event has been held every year since, during the first week of December.