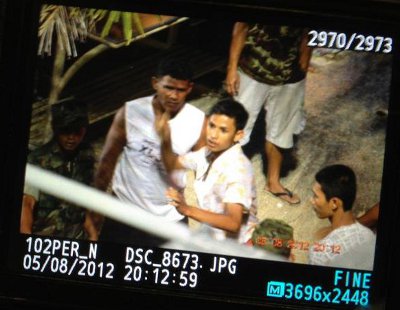 Traveling to Krabi by bus, members of Phuket’s three main fan clubs – the Hard Core, Hulk and Mask – were united into one energized cheering force to reinforce their boys in the 20th match of the season.

The supporters were hoping the new look Islanders could avenge the teams 0-1 loss to Krabi in Phuket on July 7 and grab much-needed points to prevent them from relegation next season.

Though clear underdogs in last night’s meeting, Phuket put up a commendable and strategically well-played fight, keeping the score level at the end of the first half.

The intensity of the struggle went up a notch 10 minutes into the second half, when Phuket defender Nenebi was sent off after collecting his second yellow card. Despite relentless pressure on Phuket keeper Alonso, the Islanders held on a for a hard-fought draw.

[For match highlights, which do not contain images of the subsequent hooliganism, click here.]

A certain segment of supporters from the home stands, however, were less than content with the result, the officiating and Phuket’s players and fans alike.

At game’s end, a squabble ensued when a number of unruly Krabi fans came over to the Phuket cheering section, where the visitor fans had just finished singing their traditional tribute song to their team.

Rocks, bottles and wooden boards were launched, prompting the micro-hostage situation in which hundreds of fans retreated to the relative safety of the wide-open, well-lit pitch. Joining them in solidarity were a number of more friendly Krabi fans.

The situation was finally under control for a safe, mass-exodus of the stadium by about 10:30pm; the fans returning safely to Phuket by 1am.

For video images of the scene outside the stadium after the match click here.

For the full report, see the sports section in the paper, out this Friday.

Though earning a point, Phuket remain in 15th place of the 18-team league. The one point garnered by Krabi was enough to move the Andaman Eagles to third place, back into promotion zone.

Kick off for the match at Surakul Stadium will be at 6:30pm.

Krabi will next play an away fixture against league leaders Ratchaburi this Wednesday. Krabi won their home leg against Ratchaburi 1- 0 on June 13.

Other results this weekend: