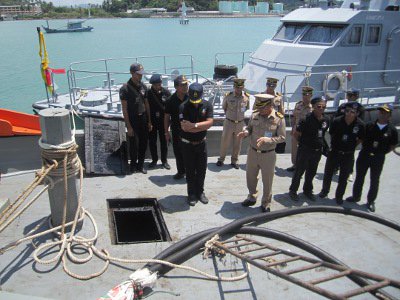 PHUKET: Phuket Customs officials this morning announced the seizure of what they claim is 8 million baht of smuggled fuel.

Customs and navy officers seized the “black oil” as it was being pumped from a wooden ship converted into a fuel tanker to a fuel transport truck waiting on shore late on Friday night in Krabi.

Two crew members of the boat, docked at the Baan Bor Muang Pier in Khlong Thom District, as well as the driver of the fuel transport truck were arrested in the raid.

After they were unable to produce a manifest for the shipment or other necessary documents, the three men were taken into custody.

A total of 30,000 liters of fuel were seized as evidence, along with the tanker and transport truck.

The suspects said they were hired by a “Thai investor” to bring the shipment ashore at the designated location.