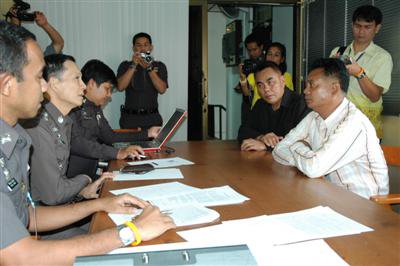 PHUKET CITY: A village headman from Pattalung province yesterday surrendered himself to Phuket police in a bid to clear his name over allegations he was involved in the shooting murder of Jintana Plaza heiress Komkai Kositkoon in July last year.

Mr Wiroj “Plop” Issara, 47, a headman in Phatthalung’s Koh Maak district, surrendered himself to Police Region 8 Commander Santarn Chayanon on February 17 after he was named in a police warrant as a suspect in the murder, along with six other men.

The gunman, 39-year-old Arun Chanma, was arrested in December 2008 and confessed to carrying out the assassination along with two other men.

The suspected involvement in the crime of Mr Wiroj and the six new suspects is as yet unclear.

The development follows two cases of suspected arson at the Jintana Plaza shopping center within the last week.

Mr Wiroj is being held at Phuket Provincial Police Station.